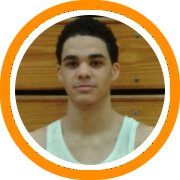 The point guard position was the Catamounts top priority heading into the summer recruiting period and after targeting a number of talented options from the northeast and beyond, they ultimately zeroed in on Douse.

Douse has tremendous size and length along with deceptive athleticism.  He has all the winning intangibles that coaches look for in their point guards and a good understanding of how to best utilize his physical tools.

He’s bounced around a little bit in recent years – playing for Lee during the high school season but then running with the Texas based Franchize All-Stars during the AAU season while also spending time with the Canadian junior national team – and was consequently flying a little under the national radar.

Credit Vermont head coach John Becker and his staff for finding a rarity in today’s day an age – an under-recruited player capable of coming in and making an immediate impact as a freshman.

Douse is the second Lee Academy prospect to make his decision this week following Mohamed Bah’s commitment to Drexel on Wednesday night.