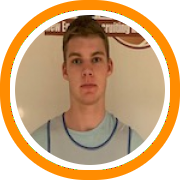 It should come as no surprise that the best 2020 prospects currently playing in the state of Vermont are currently at the state's only premier prep program.

While the local products inside the VPA have risen their profile in recent months, and expanded our rankings because of it, the top scholarship prospects still lay along Long Walk Trail in Saxtons River.

CJ Jones is an elite shooter of the basketball and looks like a steal for Boston University after pushing his recruitment all the way up to the A10 before deciding on the Terriers.

Jake Cook is an athletic big man who has made steady strides during his time with the Wildcats and is now heading to the NEC and LIU. Bijon Sidhu is another player who has improved consistently over the course of the last 18 months and also holds the distinction of the best available prospect in the state at the moment. Raphe Ayres and Andy Christos are also among the top five prospects in the state.

From the local ranks, South Burlington guard Evan Parker is currently the best of the bunch and 6th overall in the state while Mount Mansfield's Connor Philbrick checks is the top seneior big man in the state association. CVU's Ethan Harvey has had a storied career and been a known name for years now while Jensen Daly and Blake Whitelaw round out the top ten.