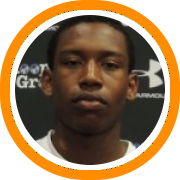 Charleston Southern is a division I university in Charleston, South Carolina that competes in the Big South Conference.

They became the first division I school to offer Upchurch a scholarship earlier this fall and landed a verbal commitment from the point guard on Monday morning, following his official visit over the weekend.

Next year I'll be joining the Bucs and the rest of the CSU family . #CSUBBALL🏀📚 @CSU_Mbball

Upchurch is a hard-working and scrappy guard, known as one of the better defenders in New England. He’s made consistent strides to his offensive game in recent years, not only becoming a more consistent shooter from the perimeter but also advancing his understanding of how to play the pick and roll.

It was those iprovements that helped him play his way onto the division I level where he'll bring a solid two-way player and dependable leader.