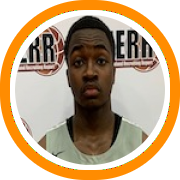 A year ago, Bruce Saintilus had just wrapped up a decorated career at King Philip Regional High School and yet was very under-the-radar.

He opted for a post-grad year in hopes of proving himself against higher levels of competition and ended up doing just that and emerging as one of the key leaders for a Bridgton Academy team that exceded all expectations this season.

Of all the unsigned seniors we've profiled so far this spring, no one has received more glowing recommendations, as coaches absolutely rave about what Saintilus brings to the table.

My love for basketball creates a burning desire and drive for me to be the greatest player I can. This love drives me to compete, to hold my teammates accountable, and to be the best person on and off the court. When I think about playing basketball, I think of a dog's mentality. A dog's mentality is like playing with a chip on your shoulder; you must play every game like it's your last. There's a constant feeling that you must prove yourself and that you belong. To me it means trying to play harder than anyone on the floor, making winning plays, and is willing to take on any challenge to help the team win. I've always played with a chip on my shoulder because I feel that I've always flown under the radar and continue to be underrated. This chip ignites the fire to my dedication of my craft and strengthens my mental toughness to continue to stay true to the process and wait for my opportunity to come. Deciding to go for a post grad year and attend Bridgton Academy not only helped me academically and athletically but also helped me build friendships that will last a lifetime. Competing in the NEPSAC reinforced my belief that I can compete with anyone on any night. I feel that I have yet to even scratch the surface.

"Bruce is probably a 'textbook over-achiever' that can't be meant as a knock.  He simply outworks most people.  So if you define work-ethic as a 'skill' or 'talent' then right off the bat Bruce leads the pack.  I think the fact that our team this year was generally regarded as significantly better is a simple reflection of having more talented players.  You don't go 19-12 in a hybrid NEPSAC AAA and AA without some dudes who can play.  And I believe that Bruce was the "God-Father" of our team.  We had a lot of leaders, but his maturity stood out in the same way that Ed Cooley's did to me a lifetime ago.  Both guys were mature beyond their years in prep school. And it translated to on court performance and winning.  Bruce is the perfect fit for a position-less program.  He can guard 2-4 always taking on the challenge of guarding the opponents best player, knocks down the three-point shot, and attacks the rim.  He plays bigger than his size.  He works at his game non-stop.  His passion for the gym is contagious. Can he get better? Yes.  More importantly, will he get better?  No question.  Bruce is the prototype modern player with old school grit. He will find a way to be a positive contributor to any team he lands on.  "
- Whit Lesure, Head Coach, Bridgton Academy

"Bruce Saintilus is a stand up student and athlete. What makes Bruce unique is you can put him into any system or program and he will find a way to thrive and make himself effective. Bruce is hardworking, dedicated, and coachable - three words any coach would love to hear about their potential player. Bruce is very mature for his age and has tunnel vision on reaching his goals on and off the court. Bruce is a player that attacks the basket, he is a solid three point shooter, and he can defend with the best of them. What Bruce may lack in talent he gives you ten times over in effort."
Paris Horne, Bridgton Academy Assistant Coach & former St. John's player

"Bruce was an invaluable part of our team's success. He is a selfless player, an exceptional two-way player who constantly makes winning plays on both ends of the floor. He always seemed to have his best performances when we needed him the most. Bruce will be an impact player immediately for any college team. He is one of the hardest workers I have ever coached in my 11 years. He is a natural born leader."
- David DeStefano, Head Coach, King Philip High School

Culture. Toughness. Work-ethic. Leadership. Intangibles. Versatility. If those things are important to a college coach, then they'll be interested in Saintilus. Offensively, Saintilus may not be a focal point at the next level, but he's the ultimate glue-guy who is serviceable in numerous areas on that end of the floor, able to stand out defensively, and plug a variety of holes. In short, he's the type of guy that college coaches typically don't value adequateyl, until he's on their team.