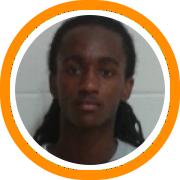 It didn’t take long, however, for the slender and athletic 6-foot-1 guard from LaPlace, Louisiana to prove himself a reliable offensive threat – capable of knocking down big shots in clutch moments – alongside Wayne Selden. Over 29 games, he compiled averages of 17 points, three assists and three rebounds per game. He also developed a reputation as a solid perimeter defender with deceptive length and quickness.

His most productive games included a 26-point performance in a win over Vermont Academy at the Spalding Hoophall Classic Invitational Tournament in Springfield, Mass. in late January and a 28-point outburst in a thrilling, quadruple-overtime victory against Lawrence Academy five days later.
Area college programs quickly took notice.

“I had a lot of coaches contact me about staying up north and playing basketball,” Victor told NERR from his native Louisiana during a recent phone interview. “Franklin Pierce put a full scholarship on the table and told me I could sign right then and there. But because I had a couple things going on with my family, and we talked about it, me playing up there and the money and things like that, I ended up not going to any school up there and coming back home.”

Even when the New Jersey Institute of Technology – a Division 1 program that came along late in the recruiting process – and offered him a walk-on spot, the geographic location and finances were still too great.

Since graduating from Tilton in late May, Victor has returned home and focused on improving his basketball skill set while also taking summer classes to get a jumpstart on his college diploma. He hopes these collective efforts will make him a more attractive Division 1 prospect.

In terms of basketball activities, Victor is spending roughly 27 hours each week engaged in a series of shooting and ball handling drills, conditioning and weightlifting routines and nightly pickup games intertwined with a few highly competitive men’s leagues.

Academically, he is taking math and science courses at Southern University in an attempt to advance his studies. His dream career is to one day become a mechanical engineer in the automotive industry. He admits to being fascinated with cars, how they work and what makes them travel at increasing speeds.

As of last week, however, Victor only had one Division 1 school from the south expressing interest in him.

“I contacted the Southern coaches and I am going to try and do a walk-on,” Victor said. “It’s more or less a tryout, not a guaranteed walk-on.”

With the audition tentatively scheduled for the second-half of August, Victor remains optimistic that either the Southern opportunity, another Division I school or even, perhaps, a strong junior college program will come forward and reward his hard work with a scholarship offer.

Still, Victor believes opting for a postgraduate year was the right choice. The time provided him with experiences he believes will serve him well on both the basketball court and beyond.

“If there’s anything I learned playing alongside the great Wayne Selden, it is how to compete, compete, compete,” Victor said. “Never say die. Never give up. (I will bring) leadership, speed, a great shot, a good personality and experience. I don’t think I would come in at the D1 level as a rookie, as a freshman. (I would be) new to the environment, but not new to the game.

“Tilton played a big role in my development game-wise, moral-wise and life-wise, especially as far as maturing with me living away from home.”

As his situation sorts itself out, Victor knows that despite being miles removed from his teammates from last season, he is by no means alone. He continues to receive the full support of his Tilton brethren whom he shared long bus rides, countless practices, agonizing defeats and memorable victories.

“They’re constantly texting, asking and wondering,” Victor said. “We’re real friends. They get back to me, I get back to them. I’m constantly texting Wayne about Kansas and asking him about the D1 experience and what is it like. Keeping in touch with Terance (Mann) and asking him what is going on with his recruiting. Also asking Johnny (Joseph) . . . they’re waiting for me to sign. My coach, Marcus O’Neill, actually texted me today to see what I’ll be doing this fall. They’re all keeping in touch.”

Below is a copy of Victor's post-graduate highlights care of Ballas TV: