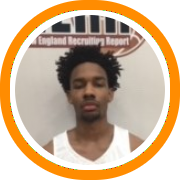 Selden is the younger brother of former Tilton star Wayne Selden who went on to star at Kansas for three years before making it in the NBA, where he currently plays for the Chicago Bulls.

A Roxbury native, Anthony Selden returned to New England this year after having spent the last few years at Lawrence High School in Kansas.

A highly athletic 6-foot-5 wing, he is both a late-bloomer, who has grown a couple of inches in recent years, as well as fairly new to the game of basketball, after growing up playing primarily football.

He put up 14 points and 5 rebounds per game for the Rams this year while still showing a ton untapped potential.

"Anthony is an excellent teammate with a good work ethic and an elite athlete," said Tilton head coach Marcus O'Neil. "We're very excited for him."

He announced his commitment via a twitter video which included some of his season highlights which showcase his physical tools and high-ceiling.