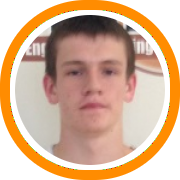 Serving as a tune-up for the upcoming evaluation weekend, on Saturday Basketbull hosted The Preview, a one day event showcasing some of the top team in the Northeast. The field was highlighted by two New England powerhouses, the Mass Rivals and BABC, both of whom went 2-0 in preperation for their respective Nike and Adidas circuits. The top matchup of the day pitted the Rivals against the New York Lightning, who made the trip up to Springfield as they set their sights on qualifying for Peach Jam for the second consective year.

In what turned out to a showcase for outstanding guard play, the Rivals used a second half run with some impressive ball movement to pull away from Lightning for a 65-54 victory. Offensively, the Rivals were led in the victory by guards Makai Ashton-Langford, Curtis Cobb, and Jalen Adams. The Lightning, who went 1-1 on the day, were paced by guard Jermaine Bishop and center Jessie Govan.

Curtis Cobb (Mass Rivals): Even on a Rivals team stacked with guard talent, Cobb stood out in both games on Saturday. He always seems to play within the flow the game and quietly dominates the game on the offensive end.

Jalen Adams (Mass Rivals): Adams was as good as advertised, showcasing his trademark athleticism and playmaking abilities. Matching up against a very talented Lightning backcourt, he was extremely tough to stop attacking the basket.

Makai Ashton-Langford (Mass Rivals): Ashton-Langford may very well have been the most impressive player on the court against the Lightning Saturday afternoon. He came off the bench and made an impact on both ends of the floor, getting out in transition and setting up teammates off the bounce. He also showcased some excellent athleticism, finishing strong at the basket over an unsuspecting Lightning defender.

Wenyan Gabriel (Mass Rivals): Gabriel came off the bench and provided an instant spark on the defensive end, blocking 5 shots against the Lightning. Despite his thin frame, he battled inside on both ends of the floor.

Desure Buie, Jermaine Bishop, and Elijah Pemberton (New York Lightning): Trio of guards led the Lightning on the perimeter in a win over High Rise Team Up and against the Rivals. All three  are tough, defensive minded and impact the game on both ends of the floor. Buie looks most comfortable running the point, while Bishop is a combo guard who is a constant catch and shoot threat. Pemberton is extremely versaitle on the wing where he plays much bigger than his 6-3 height using a combination of long arms and athleticism.

Jeremy Miller (BABC): Miller showed a tremoundous amount of potential in a pair of lobsided wins Saturday night. His is extremely athletic and active around the basket, and combined with a jump shot that extends out to 3-point range, he is a tough mactchup for anyone. Big-time prospect.

Tyree Robinson (BABC): Of all the great athletes on display on Saturday, Robinson stood out the  most. An elite leaper that dunks everything around the basket, he thrives on the defensive end blocking shots and getting out in transition.

Jessie Govan (New York Lightning): Govan, who is a legit 6-10 and broad shouldered, is a mammouth player inside for the Lightning. He was impactful in both games blocking shots and scoring around the basket, where he has a nice, soft jump hook shot.

Steve Enoch (High Rise Team Up): Enoch was extremely impressive in a loss to the Lightnning Saturday afternoon. Going against the bigger Govan, he scored 10 points and hit a pair of 3-pointers. He also did nice job rebounding and blocking/altering shots.

Ian Gardener (High Rise Team Up): A quick guard/forward, Gardener used his athleticism to get out in transition and make plays around the basket.

A.J. Brodeur (Middlesex Magic): A week after coming up with a buzzer beating lay-up at the Northeast Hoops Festival, Brodeur picked up right where he left off in the Magic's first game of the day on Saturday, finishing with 24 points and 15 rebounds in a 67-55 win over High Rise.

Ryan Boulter (Mass Premier): Boulter carried the load offensively in a pair of wins for the Mass Premier. A 6-5 wing, he has a nice inside/outside game and really looks to score the basketball.

Marcus Giese (Mass Premier): A slender but quick big man, Giese finishes well inside and makes plays on both ends of the floor.