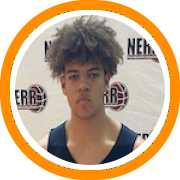 20 years after he was once a local star himself, Courtney Sims is back on the local AAU circuit, only this time as a program director and coach.

His playing career took him from local courts to the University of Michigan and then a professional career that lasted more than a decade with stops in the NBA and various international leagues around the world.

Since his retirement in 2018, Sims has returned home and laid the foundation for a program that now includes several sleepers, including a pair of 6-foot-9 big men.

Sawyer Mayhugh was probably one of the best kept secrets in New England until recently. He’s landed a trio of D1 offers in recent months, but even those were based strictly on his video highlights, with virtually no D1 coaches attending his games last winter and the subsequent spring and summer travel seasons being cancelled.

When we visited Team Sims for the Be Seen Tour, Mayhugh didn’t disappoint. He was every bit as big as advertised (which isn’t always the case). He had a strong build, excellent athleticism for his size, a good foundation of early skill, and plenty of upside still to discover.

His running mate up front is Aidan Clarke from Lexington Christian Academy. Clarke may not be quite as physically developed, but he’s extremely mobile for his size with a very soft touch to and some floor-spacing potential to keep developing. He’s also reportedly been improving on an almost daily basis.

While Mayhugh and Clarke have the highest upsides on the team, they weren’t the only under-the-radar prospects in the program.

Randy Nova, another Lexington Christian product, runs the show at the point. He’s a physical lead guard who knows how to utilize his strong body and probably the most reliable playmaker on the team.

Jaeden Greenleaf is another power guard. He stars at Cape Cod Academy where he puts up big numbers and brings a similar attacking style to the travel circuit.

Kyle Phillips and Matt Baskin are two key senior leaders for the club. Phillips is a scoring guard from Catholic Memorial who never gets sped up and excels at dictating his own pace. Baskin is a physical strong 6-foot-4 forward who is the swiss-army knife here, able to plug a variety of different holes.

Will Van Houton is an undersized but strong and athletic forward while Liam Ingraham provides another reliable guard who is strong with the ball and solid across the board.

There’s a pair of prospects from Shrewsbury who are both imposing physically. Harith Kassim is a senior who is strong, aggressive looking for his own offense, and able to overpower most opposing perimeter players. Omar Abutaleb is a 6-foot-5 junior forward with a good build, solid foundation of early skill, and a lot of potential versatility that he is just starting to tap into.

Framingham’s Vinny Lassiter is another interesting prospect to keep an eye on in the class of 2022. He wasn’t the first guy to stand-out in the workout we watched, but once they started to get up-and-down, his feel for the game became apparent as he made a variety of throwback style plays within the flow of the action.

Newton South’s Phil Roberts, a strong and physical guard, and Weymouth’s 6-foot-6 big man Jonah Mincey are two more prospects to keep an eye on in the class of 2022.

Weston’s Wyatt Stephens may be the only underclassmen on the roster, but he also might be the most skilled guard. He’s still growing into his body but he already shoots it well and is equally polished with his handle.

Overall, this was yet another program that proved more than deserving of the exposure that comes along with taking part in the Be Seen Tour as we got our first look at numerous prospects who are poised to take their game to the next level in the coming years.