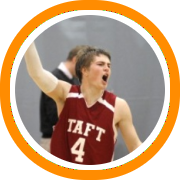 Kade Kager made the transition from Flower Mound, Texas to Connecticut’s Taft School in hopes of better preparing himself academically and athletically to potentially play college hoops at a Division 1 program.

“Playing in the NEPSAC has gotten me a lot tougher, they don’t call fouls as easily in New England and that forced me to be tougher. I got a better overall experience [at Taft]. Academically it’s better and the basketball is much more competitive,” he said.

Kager’s older brother, Kyle, made a similar move in high school, going from Texas to Deerfield Academy. On Sunday, Kade announced his commitment to American University, joining up with his brother who will begin his sophomore year at American this year under head coach Jeff Jones. American has proven to be a Patriot League power as of late, winning 20+ games in four of the last five seasons and making the NCAA tournament in 2008 and 2009.

“It’s a great situation for me, I can get a good education there and I’ll have the chance to make a run to the NCAA tournament every year.” Kager said.

The 6’1 guard, who also had offers from Texas State and Louisiana Tech, made a lasting impression this past October at the Hoop Mountain Fall Classic, where he hit some big outside shots, showed he could defend both guard positions, and showed off his athleticism via the best in-game dunk at the whole event. One of Taft’s leading scorers this past year, he picked up a NEPSAC Class A Honorable Mention all-star selection. In making his college decision, Kager said that it was nice to have the advice of his older brother.

“He really just told me to pick the school that I think is best,” Kager said, “I think American is the right fit for me…the coaching staff is so passionate, they make runs to the tournament every year. I like them a lot, and since my brother goes there, they’ve been recruiting me since [Kyle] arrived there.”

Going forward, Kade still has much more he would like to accomplish during his senior season at Taft, who went 15-10 last season:

“I really want to win the [Class A] championship, and also continue to get stronger and improve my skills,” he said, “I like making my college decision a little early, but now I need to continue working hard on my game and show this season that I belong.”