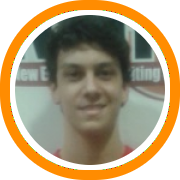 Below are a few players who stood out for their performances on Saturday afternoon:

New Jersey Pirates – Point guard Yasim Smith quarterbacked the Pirates offense and ensured that his teammates were in correct defensive position. When defenses sag, he also showed the ability to light it up from the outside. Jordan Zagdaou, an athletic slasher who rotated between the three and four, was a consistently strong on the glass. The Pirates’ backup point guard, Zachary Torres, also had a strong performance distributing the ball to his teammates.

New Heights (NY) – Akintoye AK Ojo is as raw as they come, but the 6-foot-10 is also a tantalizing prospect. In his first year of organized basketball, the Nigerian native is still very much coming into his own. His incredible length already allows him to be a factor on the defensive end and his speed gives him the benefit of being able to outrun equal-sized players. As his offensive repertoire is honed, which, according to coaches, includes a jump hook, drop step to the right/left and plenty of head and shot fakes, high majors are sure to come calling. His teammate, Prince, is already a refined perimeter scorer, who poured in an effortless 20 points in the win over the New Jersey Pirates.

Mass Rivals – With the u15’s playing up, the Rivals were led by newcomer Tomas Murphy, who at 6-foot-7, already displays ball handling skills and a basketball IQ well beyond his years. His ability to score on the perimeter and take it down low was equally impressive. As his frame fills out, he’ll become an even more effective rebounder. Saul Phirri also played well for the Rivals continuing what has been an impressive run this spring.

New England Playaz – The Playaz came out with a boost of momentum following Friday’s announcement that they’ll be reinstated for the coming July live period.  Jarred Reuter was a load inside throughout both wins while Tyree Weston was a true force in transition.  Crew Ainge could be one of the most improved players in New England, boasting a buffed up physique and more consistent jumper, while continuing to fly around the court and be very active.

Expressions Elite – A normally u15 squad that was playing up in the u16 division, Expressions showed well throughout the day Saturday.  Tyonne Malone was the primary playmaker throughout, making a series of athletic and instinctive drives to the rim, while Winchendon forward Baris Ulker also stood out as a talented player to watch closely in the class of 2016.

Greater Boston Lions – Ray Lara and Fru-nwi Che formed a potent one-two punch for the Lions.  Lara, a sophomore guard, was the playmaker for the team with his ability operate with the ball in his hands.  Meanwhile, Che showed his versatility as an inside-out scoring threat along the frontline.  Together, they put points on the board in high volume throughout both games.

Mass Hoops Jaguars – Six-foot-4 forward Zachary Parsons was active on the floor, connecting on midrange jumpers in transition and crashing the boards at both ends. He also added a couple defensive blocks. Tyler Desrosiers, the 6-foot-1 shooting guard/small forward with a scorers’ mentality, showcased his unlimited shooting range and quick release. Though defenses denied him the ball, he had a knack for trailing in transition, where his teammates found him for open three-pointers. When he was crowded by defenders, he didn’t hesitate to dribble drive against athletically superior opponents.

CT Select Duke – Tifa Wright and Michael Judkins headlined Selects athletic backcourt which gave the Jaguars problems all afternoon. Not only were they active in a three-quarter court zone trap defense that created numerous turnovers, but the three-point range of both players was too much firepower for the Jaguars defense. Inside, the presence of 6-foot-7 forward Tre-Kal Gibbs was formidable. He collected a half dozen blocks in the first half alone.

Boston Warriors – In a tight afternoon game with MBNation, Shaquan Murray was the go-to player for the Warriors. The 6-foot guard with dynamic quickness was able to get anywhere he wanted on the court. Even when defenses knew he was going to shoot, he took quality, high percentage shots. Particularly impressive was his ability to effectively use glass when either moving to his right or left.

LVBC – Brendan Wagner is a long 6-foot-8 forward, who showcased one of the tourney’s more refined post games. His sound footwork, solid ball fakes, spin moves and knack for releasing soft shots from all angles was impressive and earned him multiple trips to the free throw line, where he shot a high percentage. Zack Quattro provided a spark with his outside shooting, a luxury that gave LVBV an opportunity to play inside-out. Jamelle Christian also played well in spurts. His solid handle in traffic and court vision allowed him to set up teammates for wide open shots.

New Heights (NY) – At 6-foot-8, 275-pounds, junior forward Jordan Washington moves like a man half his size. The big man was a consistent presence in the lane, which did not overshadow his deceptively smooth footwork and soft hands. Washington is likely headed to junior college next year, though a post grad year at prep school is not out of the question.

BLVD Boys – Guards Gavin Dibble and G Allen led BLVD to a decisive win over the North Shore Bobcats. Dibble was able to control the tempo at the point, and used his speed and court vision to find teammates for open shots. According to his coach, Allen has been working on improving his ball handling, and it showed Saturday, as he both scored at the rim and set teammates up for open shots off the dribble.

Middlesex Magic Giordano (MA) – Guard Bryce Boggs displayed a versatile offensive arsenal in his team’s blowout win over CT Hoop Stars. Boggs repeatedly slashed his way into the paint and scored at the rim with his off hand. He also swished a couple of gorgeous midrange shots. Joshene Joachin was a force on the boards for Giordano, and used his athleticism to get free at the rim for a couple of easy baskets.