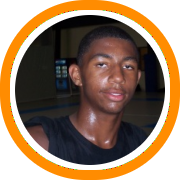 With the abundance of coaches on hand it was a great opportunity for the players in action to prove their worth and while we profiled some of the best games of the night yesterday, today we wanted to examine some of the other players who shined:

Josh Turner & Anthony Jernigan, CT Select – Select scored a slim win over Middlesex Magic to open the evening session with Turner scoring a game high 22 points.  A long and versatile perimeter player with a smooth offensive game, Turner connected on threes, pull-ups and used his length to get to the rim as well as the free-throw line.  Jernigan was the standout for Select earlier in the day keeping the ball on a string and showing a dependable jumper.

Anthony Barry, Middlesex Magic – While Barry is typically the defensive standout for his team, the swingman was the man offensively early in the night as well, going for 24 points on a series of strong, athletic drives against Select.

Tarik Smith, Expressions & Rony Fernandez, Metro Boston – With Expressions coming in with several players on the injured list, Smith took full advantage, showing a complete offensive repertoire with a series of quick scoring plays off the dribble.  He went head to head with the sharp-shooting Fernandez who surprised with some creativity off the dribble of his own.

Tommy Carpenter & Sam Donahue, RI Hawks – Carpenter led the way in the Hawks’ opener as they scored a win over a talented CT Select squad featuring Kuran Iverson and others.  Donahue caught fire from behind the arc in the Hawks second win of the day, knocking down four three-pointers, as they knocked off Brookwood Elite.

Adam Bramanti & Matt Ellis, New England Storm – The backcourt tandem led the Storm to a win over Lone Wolf in their opening game, combining for seven three-pointers and 35 points.  Both players showed an inside out attack with a dependable long ball and dangerous driving game.

Kenny Reed, Boston Warriors & Eric Suder, Lone Wolf – Ramos and Suder led their respective teams as the Warriors and Lone Wolf locked up in a hard fought evening battle.  Ramos used his strong body and quick handle to break down defenders while also pulling up from behind the arc while Suder used his size to dominate the paint to the tune of a game high 19 points.

Thomas Palleschi & Jimmy Zenevitch, New England Storm – The frontcourt tandem led the Storm to a slim victory over Lone Wolf as Palleschi battled inside with his physicality while Zenevitch showed his skills from the high post.  Connor Merrill led the way for Lone Wolf continuing his strong summer with a 17 point performance.

Sam Longwell, New England Storm & Tyrus Weaver, CBC – Longwell and Weaver went back and forth in a classic one-on-one match-up from the perimeter in the nightcap.  Longwell finished with 27 showing a consistent jumper and high basketball I.Q. while Weaver had 29 showing his much improved dribble drive game.  Weaver was even better against the Belgiam National Team, dropping 31 earlier in the night.

Kachi Nzerem, Boston Warriors – Nzerem stepped up big for the Warriors on Tuesday night.  He used his length and athleticism to attack the basket effectively in a win over Bay State Magic and then put up double digits again vs. 518 Hustle.

Chris Bush, 518 Hustle – Bush was the leader as 518 Hustle pulled a mini upset by knocking off the Warriors.  The 6’2” guard scored a team high 18 points, knocking down a couple of long balls and scoring some in transition.

Sean McClung, Mike OLoughlin, James Ek, Mike Lombard, Granite State Jayhawks – Balance continued to be the key for the Jayhawks in their nightcap as McClung had 16, Ek 13, Lombard 13, and OLoughlin 10.

Ben Ferris, Lone Wolf – He was the bright spot for Lone Wolf as he poured in 24 points.  The 6’2” swingman simply makes winning plays for his team and has accumulated a nice following of college coaches as a result.

Arkel Miles & Jamill Powell, CT Elite – While Tom Bajda and Timajh Parker-Rivera were the stars in Elite’s late night win over the New England Playaz, Miles and Powell stepped up earlier in the night as Miles used his strong body and patented footwork to attack inside and out and Powell slithered his way to the rim.

Jared Fay, Bay State Magic – While Dennis Clifford continued to be the anchor of the Bay State team, Fay stepped up in the second half against Upstate Elite, scoring 16 points in the final 16 minutes, hitting threes and showing his bounce in transition.

Davon Marshall, Upstate Elite – Qualified in 2010 and still looking for a school, Marshall was fantastic in the loss to the Magic.  He was beating guys off the dribble and absolutely a knock down shooter from behind the arc, going six of seven from that range.

Will Michalski, CMAC Hawks – After a strong performance at Hoop Mountain’s SWI earlier in the month, Michalski earned himself a spot on our prospect list as he has a big, strong six-foot-five frame, isn’t afraid to be physical inside, and has a nice skill set for a big man.

Greg Langston, CBC – He was the team’s unsung hero in their win over the Panthers.  While undersized, Langston knows how to produce inside, using his body to perfection, making great use of his shot fake, and taking charges on the defensive end.