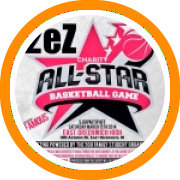 2eZ founder Derek Molloy, who is just a senior in high school, organized the all-star game as a charitable cause to benefit Jake Downey, the 11 year old son of East Greenwich High School teacher and coach Bob Downey.

Jake was born with congenital hydrocephalus, which caused several serious medical complications including brain injury, still prevents him from walking to this day, and requires constant assistance for his daily needs and care.

Jake attends The Meeting Street School, an inclusive school in the heart of Providence where many other children with special abilities thrive on a daily basis.  Proceeds from the all-star game will go towards a handicap van that will improve the daily life of Hake and his family, along with a donation to the Meeting Street School.

The all-star game itself will be played with a “Space Jam” theme, with logos and uniforms based on the 1996 animated movie featuring Michael Jordan.

Every fan who comes through the doors at the 2eZ All-Star Game will automatically be entered for a chance to win courtside tickets to a Boston Celtics game while there will be additional raffles for an authentic Rajon Rondo jersey as well as an authentic Kevin Durant jersey from the 2014 NBA All-Star game in New Orleans.

The day’s festivities will begin with a dunk contest at 5pm immediately followed by the all-star game.  Here are the complete rosters:

Here's a look at the 2eZ All-Star game preview video: