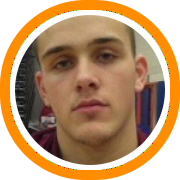 Goldey Beacon is a small college in Delaware with under 1000 undergraduate students and a strong business program.  They compete in the Central Athletic Collegiate Conference along with 13 other NCAA division II programs from along the Mid-Atlantic region.

Carty is a highly skilled lefty and the prototypical face-up four-man who stretches opposing defenses with his long distance shooting range and understanding of how to play.

He graduated from Natick High School in Massachusetts before attending St. Andrew’s and is also a product of the Boston Warriors AAU program.

Dascy is a four year member of the St. Andrew’s program who has won over 100 games in his high school basketball career.

Deemed a “utility player” by coach Coach Hart, Dascy is a good athlete on the wing who defends well, gets to the rim, and is a much improved shooter.

He joins former Saint Tom Garrick to become the second St. Andrew’s product to commit to Johnson and Wales in recent years.

Carty and Dascy follow senior swingman John Geary who pledged to Emerson College last month.  The six-foot-five swingman is a highly skilled southpaw who specializes in knocking down shots from behind the three-point line.

Geary is also a true student athlete who carries an extremely high GPA while also starring on the hardwood.  He’ll be playing under first year head coach, and former Boston College star, Bill Curley next year at Emerson.

St. Andrew’s is also sending a member of their varsity two team on to play at the next level with Aaron Brown’s recent decision to attend Emmanuel College.  Brown is a six-foot-three guard who has scored over 1000 points during the course of his career.

Tom Hunt and Andre Berry still remain available in St. Andrew’s senior class.  Hunt is a sharp-shooting guard who already owns scholarship offers while Andre Berry is a true big man and a major match-up problem with his back to the basket.