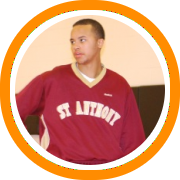 One of the most talented post-holiday tournaments in the nation, presented by Shooting Touch, is taking place at the Kroc Center in Boston this weekend between eight of the most respected high school hoop programs in the Northeast. The tournament is run entirely for the fundraising and promotion of Shooting Touch’s Sabbatical Program, known as the “Basketball Peace Corps,” which funds a $25,000 trip overseas for college seniors with a future in basketball to “help foster education and influence positive social change in third world communities.” New England Recruiting Report was on hand for the first day of action on Wednesday.

A 21-20 game at halftime, Hudson Catholic was able to pull away in the fourth quarter thanks to some forced turnovers and dominance on the glass. HC got standout performances from three of their most touted recruits: Reggie Cameron, point guard Kavon Stewart, and 6’8 forward Michael Young. Young was the game-high scorer with 19 points, but had his handprints all over the game because of his ability to alter shots and rebound on the defensive end. Stewart, while finishing with nine points, had a similar effect as he tore AC apart with his quick first step on the dribble drive and using his penetrating ability to create offense for HC’s bigs. Cameron, 6’7 and built, displayed a nice skillset on the perimeter with his outside shooting, ball handling, and ability to drive to the rim. Alec Stavetski, coming off 23 points in AC’s last game, was the standout player because of his scoring. He has already generated the reputation as an outside shooter, but today had an offensive performance in which he scored from mid-range off the dribble, going to the rim off the dribble for some tough finishes, and of course using his trademark outside jumper.

This was the most highly-contested game of the day, but ultimately sophomore Khadeen Carrington (21 points) stole the show late in the game for Bishop Loughlin as they finished off East Boston late in the fourth quarter. With just two guys in double figures, Will March and Zach Gattereau, Eastie struggled the entire game with having a consistent scoring presence that they could count on. They made a 10-1 run in the fourth quarter to fight back and keep this game close, but ultimately their inability to make free throws and take care of the ball late in the game cost them.

Amityville kept it close for the first three-and-a-half quarters, but Roman Catholic eventually ran away with this one late in the fourth quarter thanks to four of their starters: high-major recruited sophomore Shep Garner, Shafeek Taylor, Rashann London, and strong guard Britton Lee. The four combined to score all 67 of Roman Catholic’s points and had one of the most impressive offensive outputs of the day thanks to patient offensive execution. Amityville was led  by 6’2 junior guard Kavione Green, who scored his game-high 23 points from all over the floor for the Warriors. His offensive production, including three-point shooting, finishing at the rim, and getting to the free throw line, helped keep Amityville in this game even when they were struggling for a bucket.

Despite the obvious difference in talent between the defending MIAA Division 2 state champion New Mission Titans and the defending 33-0 USA Today national champion St. Anthony’s Friars, this was by far the most anticipated matchup of the day, as clearly seen with the sellout crowd at the Kroc Center. Future UCLA-forward Kyle Anderson, who is a consensus top 10 player in the class of 2012, led the Friars with 12 points. Anderson and 6’3 junior guard Hallice Cooke used their length to their advantage and anchored at St. Anthony’s defense that forced New Mission into 20+ turnovers. Senior Jerome Frink turned in a strong performance down low for St. Anthony’s, finishing some nice post moves inside on the offensive end as well as leading the Friars in rebounding. If any at all, Isshiah Coleman was the lone bright spot for the Titans because of his playmaking on both ends of the floor. Coleman is very long for a 6’4 post, and had a couple nice blocks and tips to challenge St. Anthony’s defenders, while he was one of the only New Mission players who had the athleticism and physicality to somewhat keep up with St. Anthony’s talented scorers.