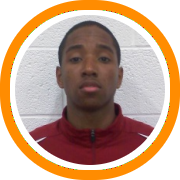 Prior to enrolling at Salisbury this year as a reclassified junior, Frazier was a two-time All-Montgomery 4A player who led Blake High School to the 2010 Maryland state championship game.  At Salisbury, Frazier joins his Mid Atlantic Select AAU teammate Zaid Hearst, who is committed to Quinnipiac.

“I saw how much Zaid was focused on his academics and basketball since coming to Salisbury.  He really seemed to be prepared for college both on and off the court,” Frazier said.

Frazier is running the point for a very talented Salisbury team this year and is learning how to better distribute the ball now that he has so many capable scorers to pass to.

“I was focused mostly on scoring at Blake, but I’ve learned how to be a better point guard at Salisbury,” he said.

The six-foot-point guard had also been recruited by American, Elon, Navy, Liberty, Columbia, Quinnipiac, and Dartmouth but still decided to make an early commitment to Bucknell just mid-way through his junior season.

Both Paulsen and assistant coach Aaron Kelly have been fixtures at Frazier’s summer AAU games, his camp appearances, and at Salisbury practices and games.

“Coaches Paulsen and Kelly have been persistent and they’ve been genuine,” added Frazier.  “Coach Kelly and I have a good relationship and he’s taken the time to speak with my dad.”

Despite the early timeline, Frazier hardly rushed the decision having already been on Bucknell’s campus on four different occasions.

“This is an opportunity that I couldn’t pass up,” he said.