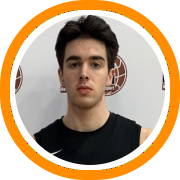 South Kent and Albany City Rocks forward Mike Rogan announced a verbal commitment to Fairfield on Sunday night, just a week after the Stags offered him a scholarship.

Rogan is currently in his second season at South Kent and has made clear strides during that time.

Known primarily for his three-point shooting up on his arrival, he not only backed up that reputation but also began to build-up his body, expanded his ability to handle and pass the ball within the flow of the offense, and demonstrated a high basketball I.Q. on both ends of the floor.

"Michael is one of the hardest working, completely committed to improving everyday, and sold out to the team guys we have in the program," South Kent head coach Raphael Chillious told NERR. "He is also a curious learner who is always trying to add new facets to his game on both offense and defense. He's a monster student who could very well have his Master's degree in the next four years."

He projects as a player who could be capable of seeing time at either forward position on a Fairfield program that will immediately utilize his three-point shooting.

Rogan joins Matthew McCool to become the second returning senior to commit to a division I school following McCool's commitment to Marist.

On a team full of shooters at @SouthKentHoops, Mike Rogan (@michaelrogan21) may be the best of them all. #BeSeen @hoopmajorhm pic.twitter.com/J9CH8U7LJ1