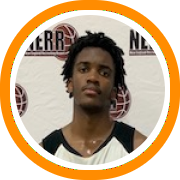 Kris Laing first came on the NERR radar in October of 2018 when he took part in the Elite 75 Frosh/Soph, when he showed some intriguing raw tools.

Roughly a year later, when he returned for the Connecticut Open Gym, we found a brand new player.

He had grown, filled out physical, diversified his game, and showed the tool-set of a scholarship level prospect.

Now, with his junior season at Bridgeport Prep behind him, Laing has high hopes for his senior campaign and promises to be a prospect that college coaches need to familiarize themselves with sooner rather than later.

I am a strong guard who can run an offense efficiently, score on all three levels, and play lockdown defense. I play my heart out every game and willing to take on any challenge.

“Kris Laing is a walking highlight reel! At six-four, this long athletic combo guard plays with strength and finesse. Kris has mastered all three levels of offense...He shoots the pro three efficiently, gets to his spots and scores. At the basket, he can go through, around and over defenders. Kris is unguardable in transition and extremely bouncy. Kris is a very coachable and likable young man. He is mild-mannered and loved by his teammates. Kris is also a very good student is a leader in the classroom.”
- Greg Thomas, Head Coach, Bridgeport Prep

"Kris is a crafty guard that can shoot the rock and has next level athleticism. He's definitely a scholarship kid and will only keep improving."
- Doc Kennedy, Director, New Haven Heat

"I'm very intrigued by Laing's potential. He's left-handed, versatile, and multi-positional on the perimeter. He has a really intriguing body type with good perimeter size, broad shoulders, and, what looks to be, great length. He's smooth with the ball going north to south in the open floor but also shifty with his ability to change pace east to west. I would describe him as more of a drive-first playmaker right now, but his jumper comes off his hand pretty cleanly too, so I think he has a lot of shooting potential. "
- Adam Finkelstein, NERR & ESPN