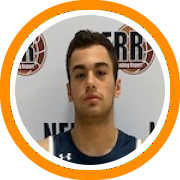 In high school, the most notable players are the ones who can make plays with the ball in their hands. But in college, when you’re facing more sophisticated and disciplined defenses, not everyone can be a primary playmaker.

More than that, playmakers need room to operate and that spacing is reliant on other players who stretch-out opposing defenses with their ability to shoot the ball. Consequently, shooting is perhaps the most coveted skill at the next level, and not only is there not enough of it, but it almost always come with trade-offs.

Millbrook’s Charlie Weisberg may be a rare exception. He desires to play in a high academic conference like the Ivy or Patriot and is already hearing from numerous coaches in the NESCAC, UAA, Centennial, Liberty League, NEWMAC, and others.

"Charlie is a natural-born leader.  He has been at Millbrook for four years and his growth, as an athlete and as a young man, during that time has been exponential.  On the court, Charlie makes shots.  Through three years for us, he is shooting just under 40% from the three-point line.  He has worked hard to develop his other skills and is college-ready as a wing who can pass and handle the ball, as well.  Defensively, Charlie has grown, using his intellect and his newly developed flexibility and athleticism to continue to improve as a player when his team doesn't have the ball.  Looking forward to seeing where Charlie lands, as this tough, no-nonsense shooter will make a hoops program and a college campus a much better place for his presence."
- Billy Thom, Head Coach, Millbrook School

"High academic prospect, with a college level body and strong offensive skills. Charlie is a highly consistent shooter, that will be an impact player at the collegiate level. High basketball IQ, which also translates in the classroom where Charlie is a first rate student. Many well respected NESCAC, NEWMAC, Centennial and Liberty League programs have been reaching out."
- Eric Polli, Chief Director, Mass Elite

"Weisberg's game translates extremely well to the college level. He makes shots at a high clip from behind the arc and provides immediately floor spacing. While he has a clear niche, he's not one-dimensional. He plays within structure and is fundamentally sound across the board. He's loaded with intangibles, has worked hard to develop his body, been extremely well-coached on both ends of the floor. In short, he's going to fit right into a college system right away."
- Adam Finkelstein, NERR & ESPN