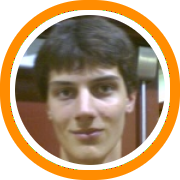 The rivalry between Rice Memorial High School and Burlington High School has deep routs, that extend back much farther than the individual players who took to the court at UVM’s Patrick Gymnasium on Friday night.  This was the third consecutive year that the two clubs had met in the division I state final, with Rice claiming victory two years ago and Burlington getting retribution last year.

Nevertheless, Burlington came into Friday night’s division I state championship game as the heavy favorite.  Not only had they defeated Rice twice in the regular season but they were riding an amazing 47 game winning streak that spanned two full seasons.

Rice relied on a tremendous defensive effort to keep things close going into crunch time, as they swarmed the paint with defenders while simultaneous contesting every one of Burlington’s three-point shots.

But Rice had the ball with one last chance to score…and their senior point guard was about to seize the moment.

Jon Goldberg made a strong drive along the baseline before stopping and pulling up over the top of the defense.  The ball sank through the hoop with 2.6 seconds left to play.

With the game now tied at 35, the defending champs had the ball and the final possession of the game.  But Goldberg almost stole the show, literally, when he picked off the inbounds pass and missed a shot from near half-court as the time in regulation expired.

But the final play of regulation was simply a sign of things to come in overtime, as Goldberg would score 10 of his team’s final 13 points in the additional four minutes.  8 of those points would come at the free-throw line as he demonstrated his grace under pressure by connecting on 8 of 10 attempts from the charity stripe.

When the final horn sounded, Rice had come away with a 48-39 victory.  Goldberg finished with 21 points, 8 rebounds, and 6 assists in his curtain call as Vermont’s most complete point guard.

Nick Meunier chipped in with 14 points and 11 rebounds while David Gagne also hit crucial free-throws in the overtime period.

Clancy Rugg led Burlington with 14 points and 9 rebounds.  James Hale contributed with 10.  But the truth was that no one on Burlington’s roster was able to get it going offensively as Rice’s defense forced them into shooting 2 of 16 from behind the three-point arc and just 22% overall from the field in the second half.

Jon Goldberg wasn’t the only star of the Vermont championships, as Grant White put on a stellar performance to lead Springfield to the division II title.  With his team down by a point at halftime, White came out and scored the first ten points on the second half.  He finished with 13 points in the third quarter alone and 33 for the game as his individual performance allowed Springfield to break the game open and eventually pull away for a 59-31 win.

Hazen owned a 3 point lead after the third quarter and used an 8-0 run to open the fourth to get some distance between them and BFA-Fairfax, before ultimately claiming the division III state championship with a 60-48 victory.  Hazen had 4 players score in double figures led by Billy Boyd with 12 (along with 13 rebounds) and Tanner Benjamin who scored 9 of his 11 in the final quarter.  Josh Woodward led BFA with 18 points and 12 boards.