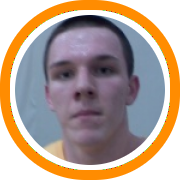 The Rhode Island Breakers hosted the first showcase of the post-season on Sunday night.  In typical showcase fashion, it was an event dominated by guards with playmaking skills.  However, one big man managed to stick out as Nikko Acosta was likely the most impressive player in the field, and certainly the best prospect in the class of ’08.  Although he is said to still be hearing from a variety of division I schools, he has yet to receive an official offer as many of those schools are apparently still worried about his previous knee injuries.  Acosta showed no sign of knee problems on Sunday night as he appears to be completely recovered.  In fact, he was running the floor very well, extremely active on the glass and the defensive end of the floor, and even threw down a couple of powerful dunks.  The New London, Connecticut native was also effective with his back to the basket as he showed a nice touch on his turn-around jumper.

Here is a look at other prospects that played well:

Ray Bowen – Bedford HS (Bedford, MA):  Bedford’s junior guard was among the night’s most consistent performers.  His tight handle allowed him to break down his defender throughout the night while he also made some opens shots from the perimeter as well.

Myles Brilhante – St. Andrew’s School (Barrington, RI):  St. Andrew’s freshman point guard was on fire behind the three-point line as he showcased a stroke with beautiful loft and backspin along with deep shooting range.

Eric Watson – Merrimack HS (Merrimack, NH):  Watson was another youngster who was impressive.  He is a dangerous catch and shoot player with a quick release who appears to have a bright future in front of him.

Mike Rivera – Durfee HS (Fall River, MA):  The junior point guard appears to have both grown and filled out physically in the past year as he now stands at 6’0” with a solid frame.  He was in playmaking mode on Sunday as he was creating off the dribble and happy to set up his teammates.

Douglas Alston – Cheverus HS (Portland, ME):  Fresh off his state championship in Maine, Alston showed many of the same qualities that were so valuable to his high school team as he defended well, communicated, and played with good energy.

Youri Dascy – Durfee HS (Fall River, MA):  The 6’6” junior big man has good potential, showing a nice touch while stepping away from the basket while also doing a nice job on the interior glass.

Matt Gibson – Lexington Christian Academy (Lexington, MA):  There are few players that have improved in the last year quite as much as Gibson.  Not only has he transformed his body and become a very good spot up shooter, but he was also the best passer in the gym on Sunday night.

Laquan Mendenhall – Harding HS (Bridgeport, CT):  The sophomore point guard had the quickest cross-over of the day as he keeps the ball on a string likes few others.  Add to that the fact that he’s playing with much better composure with the ball and you have a pretty special lead guard.

Danny Majchrzak – East Lyme HS (East Lyme, CT):  Majchrzak currently stands at 5’7” and weighs what looks to be about 130 pounds.  But he has great ball skills, deep range on his jumper, and good defensively intensity.  The most interesting thing about him is his father is 6’5” and was no bigger than his son at this age.  If Majchrzak hits a growth spurt look out, even if he doesn’t grow much more he is already a good little player.

Koang Thok – Portland HS (Portland, ME):  Coming into the night Thok wasn’t a player that many people in the gym were previously aware of, but by the end of the night that had changed.  Utilizing a quick first step and excellent ball skills, the sophomore was creating his own shot at will and proving to be one of the more consistent scorers in the field.

Others Who Had There Moments:

Toso Adebamowo (Marianapolis Prep, Thompson, CT) showcased his strong body and athleticism…Bruce Sobers (West Warwick HS, West Warwick, RI) has good size and enough skill to shoot it or put it on the floor from the perimeter…Matthew Bodden (Cambridge Rindge & Latin, Cambridge, MA) is a small, but very strong guard, who was impressive off the bounce…Travis Godley (Putnam HS, Putnam CT) is a nice division III prospect with a good looking stroke…Kyle Lawrence (Catholic Memorial, West Roxbury, MA) is another young guard with a lot of potential…Cam Sutton (Kimball Union Academy, Meriden, NH) was powerful off the dribble and efficient guarding on the perimeter…Aaron Strothers (Marianapolis Prep, Thompson, CT) continued to run the floor well and show his improved stroke from 15 feet…Peterson Bernard (Madison Park HS, Boston, MA) didn’t get many touches but was still a load inside…Jake Nelson (Nashua South HS, Nashua, NH) was crafty was his handle and passing ability inside the lane…Carl Mangum (Central HS, Providence, RI) continued to do his best work with the ball in his hands in the open court…Louis Montes (Brockton HS, Brockton, MA) is an undeniable talent who had no problems creating his own shot…Alex Levine (Weston HS, Weston, MA) is a fundamentally sound big man who made the most of his limited touches…Parris Massey (Boston English HS, Boston, MA) is a long and bouncy big with a nice touch inside 10 feet…Ryan Lehane (Marianapolis Prep, Thompson, CT) showed an ability to stretch the defense with his impressive shooting touch…Eric Callo (Marianapolis Prep, Thompson, CT) was a beast on the boards and even showed a jump hook with his left hand…Rudy Joseph (Durfee HS, Fall River, MA) is a long and athletic lefty who slashed to his dominant left side…Stephen Fox (Doherty HS, Worcester, MA) is a strong guard who got himself into the paint with good consistency.