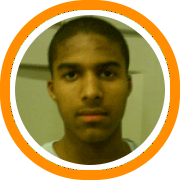 On Sunday night the Rhode Island Breakers AAU Club organized their annual spring showcase giving local players an opportunity to perform in front of several college coaches in attendance. While there were a variety of unsigned senior prospects in attendance the two biggest talents might have been players who won’t reach the college level for a few years. Nick Manning (pictured above), a 6’1 guard who just completed his freshmen season at Bishop Hendricken and Louis Montes a 6’4 sophomore forward from Brockton High School in Massachusetts both impressed throughout the evening.

Exactly four years ago Bishop Hendricken had another talented freshmen guard in Joe Mazzula, who is now at West Virginia. Like Mazzula, Manning is an extremely fundamentally sound player who can do a little bit of everything on the court. So could Manning be the next Rhode Island product to make his way to the Big East? Only time will tell but one thing is for certain…this kid has a lot of game and is only likely to get better as he appears to have his head on straight and isn’t too concerned with the early hype like so many young players these days. Sunday night, Manning showed a smooth and versatile game. He had the handle to break his man down off the dribble, a nice stroke from the three-point line, good floor vision and passing ability, and solid fundamentals and lateral quickness on the defensive end of the floor…like we said he can do a little bit of everything.

While Manning starred on court 1 during the first game of the day, Montes was turning heads on the second court. The 6’4 sophomore forward already has a strong body and very impressive athleticism. He was effective when attacking the basket in the half-court set and also running the lane and finishing in transition. The college coaches in attendance became even more interested when he began showing range on his jumper to the three point line. By the end of the night the coaches’ only complaint was that he was just a sophomore.

Other underclassmen who played well included 6’0 freshman guard Mike Rivera from Marianapolis Prep who showed excellent quickness and ball skills, 6’0 sophomore Corey Wright Jr. from St. Raphael’s High School who was also impressive with the ball in his hands and equally impressive with his court vision in the open floor, 5’10 sophomore guard Pucci Angel from LaSalle Academy who showed a very fundamental skill set and nice mid-range game, and 6’5 sophomore swingman Toso Adebamowo who continued to show the ability to attack the rim in addition to a developing shooting stroke from the perimeter. A few juniors who may have impressed college coaches enough to keep a watchful eye during the next year included 6’4 swingman Josh Hilario from Feinstein High School and 6’0 guard Brendan Degnan from Bishop Hendricken.

In terms of the seniors in attendance 6’3 Barry Latham was easily the most dominant player in the building, although he was only teasing coaches looking on as he has already committed to Bryant University for the upcoming season. It is also worth noting that Latham appears to have added about 10 pounds of pure muscle in the last month or so which only further convinces us that Latham is a tremendous get for Bryant and could have easily contributed at a wide variety of division I programs. As for the unsigned seniors some are already planning on a post-graduate year including the sharp shooting Serbian Nikoal Vukadinovic who will return to Marianapolis where he will team with 6’7 Aaron Strothers who just completed his senior season at Wareham High School in Massachusetts. Sunday night, Vukadinovic wasn’t knocking down the three-pointer with his normal accuracy but did show a lot of craft getting into the lane and finishing in unconventional ways while Strother was very impressive with his ability to run the floor, finish in transition, and knock down the elbow jumper in a half court set.

Some seniors still looking for a home next season included 5’11 guard Keenan Burke-Pitts from Marianapolis Prep who showed his tremendous outside shot and would be a nice reserve player for a high academic division III school, 6’3 guard Drew Beck from Taunton High School who continued to show his efficiency off the bounce, 5’9 guard Antone Gray from St. Raphael’s who simply made plays all night long creating offense for himself and others, and 6’1 guard Bobby Perry from East Providence High School who showed excellent quickness on both ends of the floor in addition to a nice mid-range game.