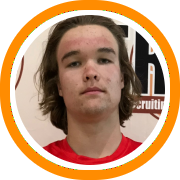 Records graduated from nearby South Kingston High School in 2018 where he scored over 1,000 career points and earned a division II offer in the summer of 2017 while playing with Black Bear North.

He ran with Metro Boston last summer and began to take his game to new levels but the ascension he showed during his post-graduate year was more dramatic than anyone could have anticipated.

Records averaged 15.2 points and 11.4 rebounds while shooting 58% from the floor and earned All-New England honors for a Saints team that went on to win the NEPSAC Class AA championship.

"He was the most improved player in the history of our program," St. Andrew's head coach Mike Hart told NERR.

Colgate is coming off a 2019-20 campaign in which they won their first Patriot League championship since 1996.