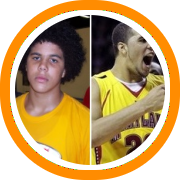 Over the last several weeks the New England Recruiting Report has taken a look back at each graduating class to come out of our region since our inception in 2006.

The study centered around finding players who proved themselves to be more valuable than we originally thought out of high school and then analyzing those cases for any patterns or commonalities among the players.

And as it turns out there were.

Generally speaking the sum total of a player’s physical attributes and basketball skill create a projected range when it comes to their college potential.  Where in that range a specific player falls often comes down to their work ethic, basketball I.Q., and other intangibles.

The biggest lesson to take away from our study is that there are some qualities that defy a player’s projected level of success – specifically three-point shooting and rebounding.   In other words, players who prove themselves among the truly elite in one of those two areas are more likely to be able to create a niche for themselves at levels higher than the rest of their tool set would otherwise allow.

Consider the examples – Of the twenty players we identified through the four year period, five of them (Tim Abromaitis, Thomas Baudinet, Shane Gibson, Tucker Halpern, and Jason Pancoe) have proven themselves to be great three-point shooters.  So good in fact, that it gave them a niche to build the rest of their game around or a weapon so important that it forced their coach to keep them on the floor, even in spite of any deficiencies.

Great rebounders have earned similar collateral, in that their ability to dominate one specific area of the game not only demands they be on the floor, but also gives them a niche of vital importance at levels higher than we could have predicted coming out of high school.  Dane DiLiegro, Mike Ringgold and Ike Azotam are all such examples.

Twelve of the twenty players identified by our study played in the frontcourt and that number is representative of the difference between high school and college basketball.

One of the hardest things for an average parent or fan to realize is that the correlation between good high school players and good college prospects isn’t always as direct as one might think.

The college game is far different, complete with bigger bodies and better athletes, and so characterized by quicker speeds and less spacing (even despite a bigger court).  Consequently, the importance of frontcourt production becomes that much more important.

That, in addition to the fact that bigger players have a tendency to develop at a slower rate than guards, helps to explain why it can be harder to evaluate big men in high school – we’re looking at players who often times aren’t finished products and moving on to a game far different from the one they’re currently playing at the high school level.

Short of an obviously dominant post player (Jordan Williams), we are looking for big men or forwards who show the physical potential to thrive in the college game (Cleveland Melvin, Jordan Henriquez, Reggie Willhite) or the skill to take their game to the perimeter (Greg Mangano, Ryan Sharry, Troy Barnes, Abromaitis, Halpern) and prove valuable in many of the modern day offensive strategies that now value step-out post players.

While our study did reveal some patterns and consistencies, predicting overachievers unfortunately isn’t as easy as finding the best rebounders and three point shooters or the most skilled and athletic big men.

Five of the twenty players identified (Matt Pressey, Chris Flores, Russ Smith, Latif Rivers, Devon Sadler) didn’t fall into any of these four categories, and so now the question becomes how can we account for these players.

Simply put, some were misevaluated.  We are obviously not without our shortcomings and very clearly, for one reason or another, we didn’t give some of these guys the credit they deserved.

But there are other factors at work as well.  The problem with our study is that there were variables beyond our control – specifically the opportunity for playing time.

Guys like Flores, Rivers, and Sadler (not to mention a host of players previously mentioned) all walked into college situations in which there was playing time, and sometimes even starting positions, to be earned from day one, and so the opportunity was there to make an impact right away.

There are plenty of other New England products who didn’t have the same opportunity.  That doesn’t necessarily mean we misevaluated them out of high school, but it does prove that opportunity plays a part in the successfulness of a college career, especially early on, and so the best analysis can only be done after those careers come to their conclusion.

With that in mind, here’s looking forward to more retroactive analysis and rankings revisited in the years to come…