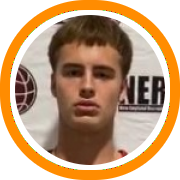 After a brief hiatus, the Prodigy Basketball Club has returned under the direction of program director Maurice Taylor.

Taylor, who many remember developed his own sons – Maurice Jr. & Jacquil – into division I players, is rebuilding a program that works with both boys and girls from ages 7-19 and strives to help them become better players, students, and members of society.

Last week, the Be Seen Tour traveled to see their varsity team and found several prospects who are clearly headed for the college ranks in the near future.

The two most impressive players in the gym were Governor’s Academy forward Liam Dunfee and St. Paul’s Jack Anderson, not just because of their impact but because of the way in which they set the tone with their energy, work-ethic, and overall approach.

Durfee is a 6-foot-6 forward who picked up an offer from Bryant last year and has reportedly taken both his body and game to new levels since. First, he’s strong and physical with a college ready body, but he also has a high motor. He was verbal, leading by example, and just a workhorse from start to finish. Not only did he score the ball in various ways and assert himself on the glass, but he also showed off some passing ability and a very good left hand.

Anderson is a player that first caught our eye last December with a huge performance at the Scholar Roundball Classic. He was another leader in this setting. He too was powerful and assertive from start to finish. Athletically he showed some improved springs at the rim while his skill-set was also versatile. He was polished with his handle and able to make a bunch of shots, both off the catch and the dribble.

One of the most intriguing long-term prospects is Destine Haywood-Gomes, who is headed to Woodstock Academy for a prep year after wrapping up a successful high school career at Wareham in which he was named Southern Conference Co-MVP, a Boston Herald All-Star, and to the Standard Times Super Team. Even at that, he’s still just beginning to put all the pieces together. He has good perimeter size, length, athleticism, fluidity, and the ability to make tough shots from long-range.

Another wing that is definitely poised to play college basketball is Brimmer & May’s Jayden Okorougo. Described as a “coach’s dream,” Okorougo is another coach-able, hard-working prospect. He’s physically gifted with good athleticism and a wiry body that has filled out into a chiseled build. He’s a threat with his jumper, but also to slash, and has the tools to be a versatile defender.

We also got our latest look at Darien Gibson, a smooth and talented guard who has been a starter since day one at Wareham who has helped lead to the team to three-straight Southeastern Conference Championships in that time, while also earning all-conference honors in each of those seasons. He’s very fluid with the ball in his hands, able to create, but also owns a naturally soft shooting touch and developing weapon with his jumper.

Younger brother, Daejon Gibson was also impressive with the ball. His handles with definite rhythm and also plays with pace. Described as “competitive and tough,” he also looks like he’s poised for a future growth spurt that would take his game to new levels.

Another currently undersized guard, yet probably the most pleasant surprise in the gym, was Cody Cannalonga. The rising junior scored 18 points per game for North Reading as a sophomore and led the Cape Ann League with 82 made threes. He’s highly skilled with the ball, especially as a shooter. He has great mechanics from behind the arc but can also stop on a dime for his pull-up. He snaps passes and plays with a high IQ as well.

Another rising junior to keep an eye on is Mark Newell, a 6-foot-6 forward from St. Sebastian’s. First and foremost, he’s incredibly resilient, having fought his way back from a broken back and now changing his body and developing his athleticism. He’s still developing his fundamentals, but has already made great strides recently and has all the tools to play at the next level.

Beaver Country Day’s Dante Valverde-Taylor is another resilient player. He lost a year due to hip surgery and is still regaining his speed and quickness, but he’s a high-energy player who is verbal, fully engaged, and the embodiment of a leader.

Fenway’s Mohamed Jalloh is a similar high-energy rising senior guard. He’s well-built with a strong frame, plays with pace, and helps set the tone defensively with his ability to guard the ball for the length of the floor.

The backcourt also includes a pair of rising junior guards from Cathedral. Nate Pena is still learning the game but is strong, able to defend, and making solid strides. Josh Aldinor is also expanding his overall game but able to make an impact with defense. Woburn’s Joe Gattuso is another 2022 guard who plays hard, is fully engaged, has some physical strength, and can knock down open shots.

Prodigy also allows a pair of youngsters to play up with their varsity players as rising 8th graders Anthony Cetoute and Clyde Kokora are both getting the opportunity to cut their teeth against players five years their senior and players we’ll undoubtedly hear more about in the years to come.