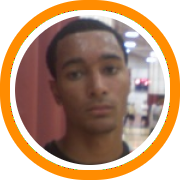 This year’s team should have no problem living up to that standard of excellence as they once again feature a talented group of players.

The big question after last season was who would replace Stevie Mejia, the team’s point guard, leader, and two time ISL player of the year.  But over the summer that question was answered as Shabazz Napier transferred from Charlestown High School.

Napier was one of the region’s hottest players of the summer as he lit up the field at AAU Nationals, attracting the attention of numerous college coaches in the process.  Now, he will join with another highly recruited player, Denzel Brito, to form what could very well be the deadliest 1-2 backcourt scoring punch in class C, and certainly the best shooting duo as both players are lethal from behind the three-point line.

Darryl Cato-Bishop will continue to be “Mr. Everything” for this team as he simply does whatever it takes to win.  The two sport star has rightfully earned a reputation as one of the region’s hardest workers.  Combine that with his sheer size, strength, and physicality and he is able to impact the game in a variety of ways.

While Napier, Brito, and Cato-Bishop will be the core of the team, one of the main reasons for Lawrence’s long history of success is because they have always gotten good production out of their role players.  This year should be no different with 6’5” junior Sarkie Ampin, 6’3” sophomore Marcus Grant, and 6’1” sophomore Dan Giovanchini all expected to be important contributors.  Also, don’t discount the defensive presence of Ollie Taylor, one of the school’s top football players, off the bench.

Ampin is a big and strong post player who will likely be given the charge of handling the painted area on both ends of the court.  Grant is a potential star in the making for this Lawrence Academy team and should be able to score points and make plays right away this year given the opportunity.  Fellow sophomore Giovacchini saw some time last year as a freshman and should be ready for an increased role this season.

Ultimately, this team is likely to be one of the last two teams standing at the end of the battle for the class C championship.  And if history is any indication the team standing alongside the opposite bench is likely to be St. Mark’s as the two schools have met in the finals in the last two seasons.  With Lawrence claiming victory in 2007 and St. Mark’s getting retribution in 2008, this year could potentially be the rubber match as the two programs could very well be destined for each other once again come March 8th.