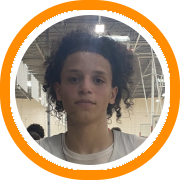 Just like most years, a number of New England prospects have made moves to NEPSAC schools to continue their high school careers. NERR will be highlighting some of those players in this article.

Tyler Betsey is now attending St. Thomas More after playing in the CIAC last year for Windsor HS. The forward had a breakout summer with NY Rens, earning a spot on the recent 247Sports national rankings at 68. He is a very good three-point shooter off the catch with a complimentary mid-range pull-up game that he gets to when attacking closeouts.

Ryan Mela decided to play for Newman School this upcoming season after attending Natick HS last year. He had a very strong summer on the UA Next circuit with Middlesex Magic. Mela brings explosiveness, versatile scoring, and rebounding as a forward.

Darius Lopes' next step will be at Vermont Academy in NEPSAC AAA after playing at Bishop Hendricken. He will be moving into the class of 2025. The guard possesses a nice blend of pace, playmaking, and long-range shooting ability. Lopes plays AAU basketball with Rhode Island Elite.

Allyn Wright is reclassifying into 2025 at St. George's School after competing for East Catholic during the past high school season. He was an integral part with Betsey on a NY Rens team that made it to the Nike Peach Jam E16 championship game. Wright can hit shots in the mid-range or three-point areas while also making strides as an on ball playmaker.

Daithi Quinn is another prospect on this list moving into 2025 after a standout season at North Quincy HS. The shooting guard makes treys at a solid rate when spotting up, has good reflexes jumping into passing lanes for steals, and some athletic pop in his legs. He is now competing on the Nike EYBL circuit for BABC.