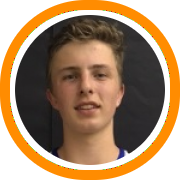 With a full spring of basketball now behind us and the July live period on the immediate horizon, it's time to release our updated New England rankings.

We'll roll out updated state rankings throughout the next 48 hours (so be sure to check and refresh this page) before releasing complete New England rankings on Monday and Tuesday prior to the opening of the recruiting period on Wednesday.

Please also note that incoming prep products (i.e. players that have not played in New England before) are not yet included but local products are now listed according to the school they'll attend next season, so long as it has been confirmed.

We're seeing a gradual increase of Vermont prospects like Jamison Evans, who are looking to make a name for themselves beyond their home state's borders and hopefully that's a trend that will continue this summer and fall, which would allow us to expand this list heading into the high school season.

As it currently stands the state's lone prep powerhouse, Vermont Academy, still dominates the list. Tyler Bertram has distanced himself from the field after following up a break-out second half of the prep season with a strong EYBL campaign with the New York Rens. Incoming post-graduate Tommy ONeil, a St. John's Prep alum and Middlesex Magic forward, has a firm hold on the second spot while Seth Buchanan remains a gifted long-term prospect and Travis Evee another talented addition.

With the annual comings and goings just getting started in the New Hampshire prep ranks, this is a list that is obviously just beginning to evolve. For the time being it's a pair of prep point guards who headline the rankings in Brewster Academy's Joel Brown and New Hampton's Mika Adams-Woods. Brown was one of the EYBL's biggest stock-risers as he played a starring role for CIA Bounce and stuffed every column of the stat sheet to the tune of 15 points, 5 rebounds, 5 assists, and 2 steals per game. Adams-Woods' individual numbers weren't quite as high, but he's playing a much different role on a City Rocks' team that is one of the deepest and most talented in the country. He's been exceptionally efficient in that role and proven himself on both ends of the floor.

Tilton's Eric Beckett, his future teammate Johnny McCoy, and incoming Exeter post-graduate Cameron Shockley-Okeke round out the top five. Beckett made a big impression with his two-way productivity at the end of the prep season while McCoy was a huge spring stock-riser with the Middlesex Magic. Shockley-Okeke began to emerge in a big way at the end of his senior season with Milton Academy and then exploded during the final Sunday of the April live period with Team New England.

Proctor Academy guard Mykel Derring and KUA forward Will Engelhardt, who are suiting up for Middlesex Magic and PTT Elite respectively this summer, are obvious scholarship players and already D2 priorities with a chance to play their way into D1 offers this month. Spaulding's Arie Breakfield has been the most impressive prospect we've seen from the public school ranks this spring as he and his Northeast Elite teammate Jack Schaake both crack the top ten, while Tilton's Sam Okauru has been a little under-the-radar this spring but has D1 offers in hand.

For the second consecutive year, the state of Maine has produced a deep collection of local talent that is superior to any of the other northern New England states and as a result their 2019 rankings have been expanded to include 15 players, 7 of whom play in the MPA. Deering's Ben Onek and Bangor's Matthew Fleming headline that group in terms of how they project at the next level while Edward Little's Wol Maiwen is as impactful a high school player as you'll find in the state. Trey Ballew, Andrew Hartel, and Nick Fiorillo have all emerged as prospects with scholarship caliber tools as well.

That local talent is supplemented by an already strong group of prep products beginning with the Gould Academy tandem of Wildens Leveque and Daniel Buie. That duo continues to hold down the top two spots in the state, and not by a slim margin either. Leveque has made tremendous strides over the course of the last year while Buie is one of the more dangerous scoring guards in the region. Other returning prep products including Lee Academy's Arseniy Semenov, Hyde's Frankyn Batista, Gould's Jaxon Wroe, and Bridgton's Ryan Salzberg are also among the top ten ranked prospects in the state. The Wolverines will also add Catholic Memorial alum Kani Glover, who is coming off a strong performance at the Elite 75 College Showcase, and could be a riser in the coming months.

Rhode Island may be the smallest state in New England, but like Maine, this is the second consecutive year in which there is a solid base of talent. St. Andrew's guard Brycen Goodine, who made an early commitment to Syracuse last fall, remains one of the best players in New England and on a level all by himself when it comes to the Ocean State. He put up big numbers for BABC this spring but, most importantly, got better with each session in terms of his decision making and efficiency.

The real competition begins for the second spot where incoming St. Andrew's big man Keegan Records holds a slim lead while Rocky Hill rising senior wing Tedrick Wilcox is ascending rapidly. Records has a big, powerful frame and is getting just his first taste of high level competition while Wilcox is a big wing who both plays above the rim explosively and can also knock down open threes. Cranston East's Aireus Raspberry, LaSalle's Aaron Gray, and St. Andrew's Robert Baum are also chasing scholarship offers heading into their final summer. Steven Lora and Jay-Juan Hayes, who star side-by-side with both Rocky Hill and Rhode Island Elite, continue to be mainstays in the rankings while Matt Relihn and Jack Skrzypiec both make their debut on the list.

Things couldn't be any closer at the top as Akok Akok and Jaiden Delaire aren't just competing for number one in Connecticut but are also two of the three players in contention for number one overall in New England. Akok solidified that spot with his showing at the end of the prep season but Delaire has closed the gap this spring with NE6 and continued to ascend. Tre Mitchell cracked the ESPN 100 this spring while his incoming Woodstock Academy teammates, Noah Fernandes and Preston Santos, have both seen their recruitment escalate this month while starring with Expressions Elite.

St. Thomas More's K.K. Curry and Jared Garcia have both had strong springs competing in the UAA with BMaze Elite and Houston Defenders respectively while Marianapolis Prep and Mass Rivals wing Tyler Burton is next. Hamden Hall's Byron Breland had a breakout spring with We-R1 and took his recruitment to new levels in the process while BABC and incoming Woodstock forward Darion Jordan-Thomas cracked the top 10 as a result.

When the high school season ended in Connecticut we noted the large group of guards that was bound to separate themselves in the coming months. East Catholic and NE6 guard Joey Reilly has done just that while Notre Dame West Haven's Connor Raines has shown increasing signs in the last month with strong showings at various elite camps. Hamden Hall's Christian Adams, Woodstock and Metro Boston's Tyrone Weeks, and Master's and BABC's Ben Eke rounds out the top 15.

Connecticut still has a significant, and actually growing, list of players who are just on the cusp of these rankings including the likes of Tim Dawson, Dan Porcic, Rakesh Tibby, Mikey West and Scott Vollmer.

The final state to debut in our updated New England rankings is the deepest of the bunch. We ranked 20 prospects in Massachusetts' rising senior class and there are numerous other scholarship prospects beyond that. A pair of MacDuffie teammates, James Bouknight and Ismael Massoud, continue to hold down the top two spots while their PSA teammate and NMH big man Maxwell Lorca-Lloyd rounds out the top three. It's another pair of teammates up next in Dexter and WrightWay Skills' Charles Coleman and Noah Kamba.

Wilbraham & Monson guard Idan Tretout had a strong spring with New Heights and took his recruitment to new levels in the process while Bradford Christian and D.C. Blue Devils' wing Gob Gabriel continues to intrigue coaches from a variety of levels. Team New England's Moses Flowers and BABC's Levar Williams are two of the biggest stock-risers in New England while Springfield Commonwealth forward Marial Mading is now coming on at a rapid rate with L&L  Runnin Rebels. BABC's Mitch Doherty rounds out the top ten.