Obiora, Bruno Off the Board 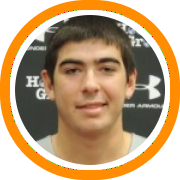 The Middlesex Magic AAU program recently announced a pair of commitments from their 2014 class.

Liam Bruno, a six-foot-three swingman from Newton North High School (MA), has committed to Wheaton College while Brookline big man Obi Obiora has committed to WPI.  Both were named Bay State Conference All-Stars by the Boston Globe this season.

The New England Recruiting Report recognized Bruno as one of the best defenders in the region in our summer superlatives series just after the conclusion of the 2013 July evaluation period.  He’s strong and competitive with a low center of gravity and so he’s able to both pressure the ball while keeping opposing scorers outside of the line.  Offensively, he’s a gifted slasher with a true knack for getting to the basket and scoring off the dribble.

Wheaton head coach Brian Walmsley has always put a premium on recruiting local talent from the New England region.  In fact, every player on the Lyons’ 2014 roster had roots within the region.

Obiora gives WPI a flat out steal at the division III level.  At six-foot-eight, he’s not only a true big man but an athletic and powerful one at that. ESPN Boston named him to their All Defensive Team following his senior season and while he’s a notable shot-blocker and rebounder, he’s also got good potential on the offensive end of the floor with his best basketball very clearly still in front of him.

WPI head coach Chris Bartley has also put a huge premium on keeping top local talent close to home and that strategy has helped him build one of the most consistently successful division III programs in the northeast, having won 20 or more games in each of the last 10 seasons.