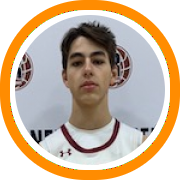 It was just about a year ago that the Be Seen Tour began with a trip to see New York Lightning Select.

At the time, we said that Peter Carey might be the biggest sleeper in all of New England. He landed his first division I offers shortly after and now, has taken his recruitment all the way to the high-major level with a recent offer from Rutgers. Even still, Carey is only just beginning to scratch the surface of his potential, since there just aren’t many guys who can match his athleticism and mobility at his size.

Carey is just one of several Northfield Mount Hermon products that are part of this year’s New York Lightning Select program. The newest addition is Jorn Everson, a skilled and tough 6-foot-8 forward who provides an ideal complement to Carey along the frontline and another division I prospect to add to the crowd of followers the program is expected to have this summer.

There’s a trio of impactful guards in the backcourt, all of whom are high academic players and three-point shooters.

Ben Chasin and Alex Halpern could be known as Select’s version of the Splash Brothers. Both are top-notch shooters from behind the three-point line and tailor made for the college game. Chasin is riding a wave of momentum heading into the July recruiting period after a strong showing at the NEPSAC Showcase, in particular one game where he knocked down six three-pointers. Halpern is certainly capable of that type of outburst as well and has the basketball I.Q. to match.

Another NMHer that may not have a big local reputation yet is JB Frankel, who joined the program late in the fall. Frankel is another very reliable perimeter shooter, but more than that he’s an exceptional passer and also has good perimeter size and a strong build.

The Perkiomen School is represented with a talented tandem of their own in Sam Pohlman and Brandon Legris. Pohlman will have the ball in his hands for his second-straight year of running the show on this team and you aren’t going to find many point guards with more confidence or flair to their game. He makes shots and plays alike, for himself and his teammates, and is looking to push his recruitment to the next level with a big summer. Legris is a skilled 6-foot-8 forward who can stretch opposing defenses while also holding his own in the paint.

Dan Vessey, a 6-foot-4 guard from the Hun School, is a very important addition for the club. Like Chasin, he’s riding a wave of momentum after a big showing during the June Scholastic recruiting period. In fact, Vessey averaged 18 points per game during the second Mid-Atlantic Independent School Shootout while knocking down over 55% of his three-point attempts.

Ethan Chassine provides another big body with inside-out skill to fill-out the frontcourt rotation while Proctor Academy guard Aidan Botti is another steady contributor in the backcourt.

The lone 2023 prospect on the roster is Suffield Academy wing Owen Moreira who provides a high-level athlete on the wing with terrific positional size and untapped potential.

The rest of the 2023 prospects take part on a u16 team that is also loaded with skilled, high academic prospects including familiar names like NMH’s Asad Syed and Avon Old Farm’s Thomas Prendergast among others.

In total, we got to see three different teams prepare for the upcoming recruiting period and collectively speaking, the biggest take-away was the growth of the program and brand under the leadership of Jesse Shapiro.

New York Lightning Select has become a program that is among the best independent groups in the northeast and knocked off multiple sneakers teams this spring. More than that though, they are now a program that virtually every high academic college coach needs to see…ranging from D3 up to D1.