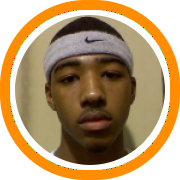 The New England Playaz, Nike Expressions Elite, and Connecticut Basketball Club all earned championships on Sunday afternoon.  The Playaz pulled away to earn the u17 title, while Expressions held on for the u16 crown, and CBC ran away with the u15 division.

In the 17 and under bracket the Playaz proved their superiority by defeating a very hard-nosed Rhode Island Breakers team in the quarterfinals, a talented CBC team in the semi’s, and a hungry Expressions squad in the final.

Playaz forward Nate Lubick was dominant throughout the day.  He stuck to his bread and butter in the opening contest as he scored a good number of his points by running the floor and crashing the offensive glass.  In the semi-finals he showed a new dimension to his game as he acted almost like a point forward.  By our count he totaled 12 assists in that game, including 7 in the first half, as he was not only making excellent decisions, but also passing off the dribble as well.  In the final he did what all great players do, make timely big plays.  Whenever Expressions seemed to be getting close, Lubick came up with a big play.  The most memorable came midway through the second half when he took his defender to the low post, called for the ball, and then powered into a drop step move to finish through contact.  While the move itself may not sound out of the ordinary, it was the combination of assertiveness and confidence that he exhibited at that time that was so special.

Erik Murphy was also instrumental to the Playaz’ second half run that eventually allowed them to pull away from Expressions.  In fact, the St. Mark’s frontcourt duo of Murphy and Lubick combined for 27 of their team’s 37 second half points.  As for Murphy, he finished with a team high 24 (Lubick had 23) as he continued to show his soft touch and high basketball I.Q. inside the lane.

Gabe Kindred was the hero of the Playaz’ semi-final victory.  He knocked down back to back three-pointers in the final 30 seconds of the game to help his team erase a late deficit and advance to the final.  Kindred also finished with 12 points in the championship game as he sliced his way through the lane and finished with good body control on several occasions.

Expressions was led by Mike Marra who finished with a game high 25 points in the final.  The Northfield Mount Hermon sniper was doing what he does best as he hunted down shots from behind the three-point line.  Also impressive for Expressions was the forward combination of Kyle Casey and Tucker Halpern.  Casey, who has clearly added some muscle to his frame since the end of the high school season, played with good aggression and came up with the highlight of the day as he threw down a two handed dunk over the top of a rotating defender.  As for Halpern he continues to be a very potent catch and shoot player.  But it was his willingness to do some dirty work today that caught our attention as he was very active on the glass in both the semi-finals and finals.

We would also be remiss if we didn’t mention the defensive effort turned in by Joe Saunders of the Rhode Island Breakers.  Although his team fell to the Playaz in the quarterfinals, Saunders’ couldn’t have done much more.  For all 32 minutes of the game he picked up full court and turned the opposing point guard for the entire length of the floor.  Between that and the impressive play of Aaron Strothers, the Breakers were able to provide the future champions with a real test in their first game of the day.

In the 16 and under division the most exciting game of the day was definitely the double overtime thriller between the New England Playaz and the Connecticut Basketball Club.  Billy Baron set the tone for the Playaz in the first half as the sharp-shooting guard seemed to be knocking down every open look he had.  But after a halftime adjustment, Taeshawn Jackson turned in a great defensive effort to keep the sharp-shooter in check.  Meanwhile another individual battle was going on in the interior as Preye Boyle and Deshawn Hamlett were bringing the best out of each other.  Boyle was getting to the rim consistently and finishing well inside thanks to his length and quick bounce, while Hamlett was showing his impressive upper body strength while powering up through traffic inside the paint.  Ultimately though, the hero of the game was CBC’s Luke Matarazzo who drained a step-back three-pointer as time expired in the second overtime to give CBC the victory.

After having used up most of their energy in their semi-final victory, CBC found themselves in an early hole to Expressions in the final.  And while CBC was able to work there way back in the game, and even cut the lead to as little as three in the final minutes, Expressions led for all 32 minutes of this contest.  Ashton Watkins had a huge outing as his high wire act allowed him to be effective around both rims as he scored in the paint (21 points) and blocked shots.  But he was far from a one man show as this team had good balance with: Michael LaPlante’s athleticism and ability to spot up for open jumpers (12 points); Derick Beresford’s speed with the ball and mid-range pull-up (9 points); Matt Brown’s ability to attack the rim and get himself to the free-throw line (10 points); and Tyler Olander’s ability to stretch the defense with his size and southpaw three-point stroke (11 points).  Also impressive was Billy Soriano who combines an ability to push the ball up the floor as quickly as any player in the field with an excellent handle that allows him to be very creative off the bounce.  CBC got good performances out of Danny Lawhorn who was able to use his dribble to get to the rim or quickly pull-up, Phillip Gaetano who made some beautiful passes, and Will Tye who continued to battle in the paint.

In the 15 and under division, Connecticut Basketball Club proved themselves to be far ahead of the rest of the field.  Even without big man Andre Drummond, CBC beat every team this weekend by at least 16 points.  The key to their success is their seemingly endless amount of talent on the perimeter as they feature a variety of players who can both drive it to the rim or spot up for open jumpers.  Fred Wilson (15 points), Jerome Harris (14 points), Anthony Jernigan (14 points), and Mike Fraylon (13 points) led the way on Sunday afternoon as CBC continued to move the ball and show good patience within their drive and kick offense.

MB Nation made a very impressive run before eventually falling to CBC.  Cameron Shorey was at his best in the final game as he led his team with 17 points and was able to dominate the lane by physically overpowering defenders.  We were also impressed by the backcourt of Josh Walker and James Ek.  Walker’s skill level at such a young age jumps right out at you, as he appears equally comfortable handling and passing with both hands.  As for Ek, he made shots from behind the three-point line with a very quick released stroke.  But the player on this team with the most potential may be Andrew Shaw.  While he is already one of the bigger players in his age group (6’5”) he projects as a wing at the next level thanks to his good ball skills and very smooth stroke from behind the three-point line.

Thanks to all the teams, coaches, players, parents, friends, and over 60 college coaches who attended the 2008 Northeast Hoops Festival.