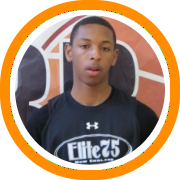 While the day’s first recap came courtesy of the action at Sacred Heart, the Hopkins School and Fairfield Ludlowe High School also hosted some top talent throughout the day.

Zach Lewis, ANU I, 15u
Lewis started the day by dropping a 37 point game and followed it up with an equally impressive 25 point performance in the early afternoon. He has great size for the backcourt and the ability to play both guard positions.  Lewis showcased a fluid shooting stroke, an array of dribble moves ranging from hesitation dribbles to well placed head fakes, a strong off hand, and the uncanny ability to hit difficult runners when the defense took away all other avenues. His shooting percentage does not dip significantly behind the 3 point line, and he made defenders who gave him space pay.

Rob Hazard, ANU I, 15u
Hazard played aggressive hands near the chest defense and really bothered opponents. On the offensive end, he drew several fouls on less agile defenders, and made two of his second game’s most exciting plays when he finished after faking a behind the back pass that the entire defense bought and finishing after bringing the ball all the way around his back to avoid it being taken from two defenders.

James Jennings, Connecticut Elite, 16u
He had a quick, strong handle running the point for the Elite. He was extremely effective at getting into the paint, attracting the defense, and dumping the ball down to his bigs for easy buckets, tallying many assists in the process.

Yahmad Roundtree, Western CT Warriors, 17U
Roundtree was a very effective jump shooter off of one bounce, and showed a very complete mid to long range game. He hit several long jumpers that were very well contested by the defense.

Mark Ellis, Connecticut Elite, 17u
Ellis made it clear that he was an athletic specimen who could jump out of the gym.  He had an absolutely explosive first step for a big man and complemented it with a very delicate touch around the rim. But his best skill is the way he finishes around the rim.  Two of his dunks on the day were absolutely nuts, one was cocked way behind his head on the fastbreak, and on another one he converted a 3 point play off of a dribble move in the paint when he pumped the ball twice to adjust from being fouled before slamming it home.

Oscar Assie, Connecitcut Elite, 17u
Over the course of the day Oscar Assie was a strong presence underneath for the Elite, and was a disciplined defender who usually kept his hands straight up on D.

John Byrnes, Western CT Warriors, 17u
His sweet shooting form and quick release sparked a double digit comeback on the Connecticut Elite in one of the best games on the day. On the last play, with his team down by one, he caught the ball, sliced through the defense with his left hand and got right to the open rim, only to just barely miss the layup off the back iron. Even though he missed, it was a beautiful take and he had a great game.

Bryan Yarce, Team Providence, 17u
Yarce was arguably the most fun player to watch at Hopkins on Saturday. It was obvious he was one of the fastest kids in the gym with the ball in his hand, and he would simply drive right by defenders on either the left or right side of the court, because he seemed equally as confident with both hands. Yarce used his speed to play excellent fundamental D as well, and got nice and close to players so that he could bother them without fouling. In a close loss against Premeire, he had 21 exciting points.

Len Singleton, Premeire, 17u
Singleton was big, strong, and fast. He penetrated defenses easily, scored in bunches closes to the rim, and although missed most of his jumpers, flashed signs of a promising mid range game. On defense Singleton showed great block timing, coming up with a few impressive blocks, and aggressively annoyed shooter Steve Bevilacqua in a game against Team Providence.

Steven Bevilacqua, Team Providence, 17u
Despite an unorthodox slingshot style shooting release, Bevilacqua was absolutely on fire at the event. In their game against Premire, Bevilacqua made 5 threes, and shot ¾ from three point range in the first half.

Brian Hershman, MPC, 16u
Hershman was shooting lights out in MPC’s opening round victory of the day as the Mansfield sophomore connected on a whopping seven three-pointers in a single contest for a game high 23 points.

Ramon Gibbons, Xpressions Elite, 15u
The explosive guard picked up right where he left off the last time we saw him as Gibbons utilized his strong body and quick first step to attack the rim to the tune of 25 points.

Tanner Hyland, MBR, 15u
Keegan’s younger brother is starting to become his own man!  Hyland isn’t necessarily the scorer his big brother is but he gets his hands on the game in a variety of ways as a pure point guard who can also score the ball.  Finished with 19 points and several assists in opening win.