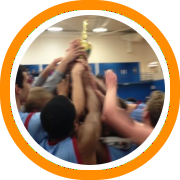 Survive and advance was the theme for Northfield Mount Hermon through both the quarterfinals and the semifinals of the National Prep Championship.

They looked well on their way to an easy win in the the quarters, until Connecticut native Zach Lewis led Fishburne Military School storming back to force OT.  NMH would survive the momentum swing in the extra period, but not without a scare.

The semifinals were a similar story as their game against Notre Dame Prep came down to the bitter end, when a potential game tying three-pointer barely rimmed out just as the buzzer expired.

Given the two hard fought and dramatic wins, and the recent dominance of Brewster Academy, NMH came into Wednesday night’s final as a definite underdog.  Nevertheless, they came out with a head of steam from the tip as Mike Fleming drilled a three-pointer on the opening possession of the game and they went on a 13-5 run to start the game.

Incredibly, they would hold that lead for all 40 minutes, going into halftime with an 8 point advantage, and surviving several runs from an explosive Brewster line-up, to earn a 78-73 win.

Josh Hearlihy played some of his best basketball of the tournament in the first half, scoring 14 of his 16 points before intermission, while Fleming also had his best game of the tournament, finishing with 13 points.

With Zena Edosomwan, who had carried the team throughout long sports of the quarter and semifinals, doing his best to hold Elijah Macon in check, Sam Donahue stepped up in the second half, knocking down a pair of crucial three-pointers while Pete Miller and Skyler White also made valuable contributions down the stretch.

Ultimately though, MVP honors went to Anthony Dallier, who finished with 22 points by making a variety of clutch shots while also handling quite a bit of the ball-handling responsibilities.

The loss ended what had been another incredible season for Brewster Academy, as they went on to score their most recent NEPSAC championship, and had won 18 straight games dating back to mid-January coming into Wednesday’s final.

The national championship is the first for Northfield Mount Hermon, whose best previous result came in 2010 when they made a run to the finals, and comes just one season after they claimed their first NEPSAC title to cap the 2011-2012 season.

Northfield Mount Hermon and Brewster Academy have now each won both a NEPSAC and national championship in the last two years.