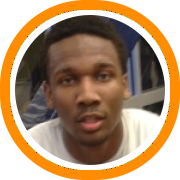 There was a new top ranked player in the country when the ESPNU 100 came out as Andre Drummond had relinquished his title to Shabazz Muhammad, a six-foot-six small forward from Nevada who is considering UCLA, Kentucky, Duke, Texas, and UNLV among others.

Drummond only dropped back a spot and “is still the best pure prospect in the class” according to ESPN’s senior basketball recruiting analyst Dave Telep.  “The 6-foot-10, 275-pounder moves with the athleticism, power and grace of a potential star in college and beyond. This race for No. 1 experienced a change heading into the season and by no means is the marathon over; Muhammad sprinted out to a lead but there's a long season ahead.”

Right behind Drummond is Mitch McGary, whose rise up the national rankings has been as dramatic as anyone’s since last spring.  He cracked the top five just prior to the summer and finishes the live period as the third ranked player in the country.

Giving New England their third top ten prospect is Kaleb Tarczewski, who solidified himself as one of the premier true centers in the entire country and currently holds the seventh ranking in the national class.

Ricardo Ledo landed in the 23 spot.  “The upper tier of shooting guards in the Class of 2012 was the most debated topic by our staff and it'll likely remain as such throughout the year,” Telep said, calling Ledo “the player with as much natural talent as any.”

Kris Dunn continued to rise up the national rankings, peaking as the second overall point guard in the country and 30th overall prospect.  Telep called Dunn “the point guard with the most upside” and went on to say “His athleticism, size, and ability to guard and get to the rim trump everyone on the list.  If he can improve on the mental aspects of his position, the top spot could be his.”

Nerlens Noel moved up one spot to become the second overall prospect in the national class of 2013, overtaking Julius Randle in the process.  Now, Noel sits only behind Jabari Parker, the six-foot-eight forward from Simeon High School in Chicago.

“After Parker continuously set the standard, the question became: Who's No. 2? Enter Noel,” Telep said.  “Not since Greg Oden has high school basketball had as dominant a shot-blocker in its ranks. He's an elite rim-protector and his summer team's accomplishments were aided by this enormous presence at the rim.”

Kuran Iverson (30) and Deonte Burton (36) were the only other New England products to crack the top 60, although Goodluck Okonoboh was identified as one of nine prospects to be knocking on the door.

Noah Vonleh took over as New England’s top ranked prospect in the national class of 2014, shooting up to the sixth spot in the national rankings while Wayne Selden isn’t far behind in the tenth spot.  Up next at eleven was Chris McCullough, who emerged as one of the summer’s biggest risers.

“With each passing month, a new name emerges and shoves his way into the national spotlight. The summer of 2011 riser was PF McCullough,” Telep wrote.  “He's yet to dominate on the high school level, but he owned U15 events in July and he debuts at No. 11 with a bullet.”