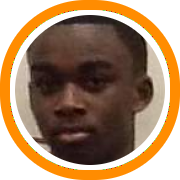 Nana Boakye-Mensah - Quick-twitch back-court athlete who plays Robin to Quan Roberson's Batman down in Taunton, Mass, both on the hardwood and gridiron.  Vicious on-ball defensive ability.  With his athleticism, Mensah could develop into a good one as he grows and his skills develop.

Thomas Dulski - Hard-charging perimeter player who attacks the basket off the hard-angled slash from the wing.  Old school one-dribble driver who takes it hard to the rack and tries to beat the defense for an easy bucket.  If the defense is there, Dulski will seek contact and attempt to get to the charity stripe for an and-one.

Ethan Telford - Talented young guard with nice ball-handling ability and a sweet shooting-stroke.  Understands how to spread the floor and moves well without the ball.  Does a nice job of entering the ball into the post and makes good decisions with the rock in his hands.  Capable of leading the break, keeps his head up on the hard transition push.  Still a young cub physically, Telford has the back-court skills and understanding of the game to develop into a serious player over the next couple of years.  As he ratchets up his aggressiveness and physicality, ET is likely to emerge before the wet paint dries.

John Riddick - Stretched-out left-hander who stands about 6'6 and has a bird-stretch even longer.  Fast and athletic with smooth body movement.  Still in the beginning stages of his offensive development, with his length and athleticism, JR has the potential to develop into a high-level slasher who fills the lanes dangerously on the break, guards multiple positions, and rebounds and blocks shots from the forward position.

Chris Amata - Athletic wing who runs the court hard to fill the lanes. Capable of finishing in transition or off the one dribble drive from the wing.  Also hits the offensive glass and gets put-backs.  Aggressive defensively, will get up and guard on the wing. Likes to compete.  As his skill-set develops and he matures physically, Amata has the potential to develop into a nice prospect.

Perry Wynn - Bumper car point-guard who weaves through hardwood traffic off the bounce like a rabbit escaping the hunt.  Pesky on-ball defender who guards the ball with palpable energy.  Nice 2016 Floor General Prospect.

Mark Hickman - High-Voltage back-court athlete who attacks the basket with energy.  Tremendous team-first attitude to go along with what showed as a genuine craving for the process of becoming a no-nonsense ballplayer.  As he grows, tightens his handle, and tames the beast that is his dribble-drive attack game, Hickman is a 2016 guard who will be passing out business cards on the Yellow Brick Road.

Daron Hughey - Talented wing-operator with a versatile offensive package and a tactful, team-approach to the game.  As his perimiter tool-box effectively gels, Hughey should be YBR-Bound.

Tyler Dion - Feisty back-court player who brings toughness and moxy to the point guard spot.  Knows how to run a ball-club and takes it strong to the rack off the bounce.  Finishes through contact at the cup and a vocal leader out between the lines.  As he matures physically and his foot speed sharpens, Dion is a Class of 2016 floor-general to watch.

Brad Landry - Skilled guard who drives the ball to the rack off the bounce.  Displayed advanced floor-vision at the 75, showcasing an honor roll interpretation of the game to go along with a cohesive team-attitude.  Nice 2017 prospect going into the hinterland.