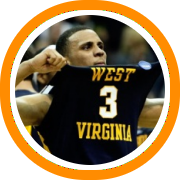 Our final look at the NCAA tournament bracket focuses on the east region where, once again, we find a host of players with roots in our region.

#8 George Mason – It was perceived to be a bit of a steal when George Mason snagged St. Thomas More’s Bryon Allen last year but the powerful guard has spent most of his first year in the CAA learning on the job, playing in 26 games and averaging almost six minutes per game.

#9 Villanova – Jay Wright’s starting senior big man also hails from the St. Thomas More School as Antonio Pena has been a model of consistency for the Wildcats, averaging 10 points and 7 rebounds per game and picking up 6 double-doubles throughout the course of the season.

#5 West Virginia – Rhode Island native Joe Mazulla is one of the emotional leaders of a West Virginia team that took home a Big East championship and made a run to the Final Four a year ago.  The team’s starting point guard has become critical to head coach Bob Huggins down the stretch, averaging over 35 minutes per game while defending the opposition’s best perimeter scorer on a nightly basis.  Danny Jennings is technically still on the roster but hasn’t been with the team since January and is expected to transfer as the year’s end.

#13 Princeton – The Tigers have two New England products in their starting line-up with New Hampshire native Patrick Saunders in one of the forward spots and Phillip Exeter’s Dan Mavraides in the starting two-guard position.  Mavraides was the team’s leading scorer (13ppg), second leading three-point shooter (39%), and third leading rebounder (4.6rpg).  Saunders averages 6 points per game and is the team’s second leading three-point shooter.

#6 Xavier – The Musketeers are led by their explosive backcourt of Tu Holloway and Mark Lyons, both of whom have roots in New England.  Holloway, who starred for the New England Playaz on the AAU circuit, was named A-10 Player of the Year this season after averaging 20 points, 6 assists, 5 rebounds, and 2 steals per game.  Lyons, a Brewster Academy product, is the team’s second leading scorer and assists man at 14 and 4 respectively.

#7 Washington – Washington looks a lot like South Kent did a few years ago with Isaiah Thomas and Matthew Bryan-Amaning leading the way and Raphael Chillious sitting on the sidelines.  Both Thomas and Amaning were named first team all Pac-10.  Thomas is the Huskies leading scorer and go to player, averaging 17 points, 6 assists, and 4 rebounds, and also knocking down a buzzer beating step back jumper to win the Pac-10 championship game last weekend.  Amaning was named the Pac 10’s Most Improved Player this year after putting up 16 points and 8 rebounds.  Chillious, the former South Kent head coach, is now in his second season at Washington as an assistant coach after his stint working for Nike.

#15 Long Island – Another South Kent product, David Hicks, was of vital importance to LIU this year as they captured the NEC championship.  Hicks was one of four players who averaged double figures in scoring while also being one of the team’s better three-point threats.  Coming off the bench was former St. Andrew’s star Michael Culpo, who put up 8 points per game while shooting over 40% from the three-point line.