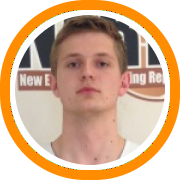 Battle for the Top Spot

Chris McCullough retains the title of New England’s top ranked senior prospect but the race is tightening to be sure.  Goodluck Okonoboh used the summer to solidify his status as arguably the pre-eminent shot-blocker in the country while Abdul-Malik Abu also closed the gap with a number of big performances during the month of July.  Ultimately, this is a race that will be decided during the upcoming prep school season as all three players have a legitimate chance of finishing as the top ranked player in New England’s 2014 class.

It should come as no surprise that Bonzie Colson jumped as much as any player in the current senior class.  The St. Andrew’s forward put up huge numbers throughout the EYBL season while establishing himself as a priority high-major recruit for a variety of top programs.  Colson wasn’t alone though as Paschal Chukwu and Tory Miller were two other players to work their way up the rankings after taking their games to new levels this summer.

With the list expanding from 25 to 40 there are a variety of new names to be found within these rankings.  Sem Kroon tops the list of newcomers while making his debut in the 17th spot.  Another big man, Kenny Grant, is up next in the 18th spot, while Willem Brandwijk is next at 19th.  The New Hampton trio of Mike Auger, Mike Leblanc, and Anthony Pate all cracked the top 25 as well after putting in strong summers with their individual teams.

A rush of early commitments this summer and fall has led to a quickly eroding board as 20 of the top 40 players in the class having already made up their minds.  The list is particularly light near the top where five of the top six, and 16 of the top 25, are already off the board.  This is a trend that is expected to continue in the next six weeks with several other prospects expected to make up their mind before November’s early signing period.

The 2014 class offers solid frontcourt depth among mid to high-major prospects.  In fact, there were only five guards ranked within the top 20 prospects in the class and among that group only one, Notre Dame Prep’s Jarvis Garrett, remains un-committed.  Conversely, 10 of the top 14 prospects in the class project as playing either the four or five spots at the next level.

New Names on the Way

NERR’s post-summer rankings only include prospects that have already played in the region during an academic season and so current rankings do not include recently arrived seniors or post-graduates.  That means that while these rankings include the true local products, this is an incomplete list and one that will feature a variety of new names when we next update it during the winter months.

Collectively, the 2014 class has more talent to offer than last year’s senior class.  While McDonald’s All-Americans Noah Vonleh and Wayne Selden provided star power in 2013, there wasn’t nearly the same depth of potential high-major prospects.  The 2014 group includes six ESPN 100 products in McCullough, Okonoboh, Abu, Joseph, Chukwu, and Terrell along with other consensus high-majors like Colson and Miller and potentially more than 15 prospects with the talent to be recruited at that level.