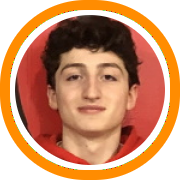 The Morgan School (Clinton, Connecticut) sophomore guard Cooper Galdenzi is ready to make a name for himself this season with the CIAC season having now arrived.

He's cut his teeth at the grassroots level, standing out for the Connecticut Noise program, and is now ready to do the same in the Shoreline Conference.

Below you'll find highlights, quotes, and everything you need to know about this up-and-coming prospect.

I am a long and athletic 6-foot-1 scoring point guard. I pride myself on being a leader who does what it takes to win. Patience and pace, are two focuses of mine when I play, along with finding my teammates in spots for them to be successful. I enjoy competing on the defensive end. Getting to spots for my mid-range pull-up off ball screens or shot fakes are major strengths of mine.

"Cooper was one of the more dynamic players on the team who can play multiple positions on the floor.   Cooper was frequently asked to play the 4 and plays much bigger than his actual size.   The foundation is in place for Cooper to become a leader in many aspects of the game."
- Shawn Conroy, Head Coach, CT Noise

"I have been fortunate to be one of Cooper’s AAU coaches over the last two years.  Cooper has shown a significant amount of athleticism, toughness and intelligence on the court along with strong work ethic that has propelled him as one of the leading scorers on our team. Along with his strengths on the offensive side of the court he is also a relentless defensive player."
- Gary Naccarato, Assistant Coach, CT Noise

Galdenzi is a young core with a strong foundation in the game. He's foundamentally sound with a good early skill set that allows him to handle and pass the ball, he's physically tough and able to play through contact, and also possesses a solid early understanding of the game. He's a player that should continue to emerge in the coming years and ultimately have a chance to play at the next level.

Morgan High School and Connecticut Noise sophomore Cooper Galdenzi is a skilled and gritty guard looking to make a name for himself this season! pic.twitter.com/SQfc0tMZQx