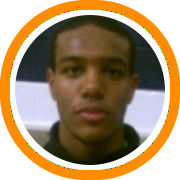 It was a day of sweet redemption for 5’11 post-graduate point guard Brian Rudolph as he was named MVP of the Class “A” championship game while leading Bridgton Academy to their third straight title. Rudolph committed to Providence last year before going through some well documented legal problems that eventually resulted in him ending up at Bridgton Academy where he has been a model citizen according to Head Coach Whit Lesure.

“He has been better then good,” Coach Lesure was quoted as saying in a scout.com article on January 31st. “When he came we told him he need to be beyond reproach in every aspect – and that’s exactly what he has done.”

Further, Rudolph has seen his legal problems resolved and has also been a high honor roll student during his time at Bridgton.

On Sunday, Rudolph returned to his home state and showed the ability to create off the dribble that made him a local star at nearby New Bedford High School.

The game began with Brewster jumping out to a quick 8-0 lead behind the strong play of their frontcourt duo of 6’10 post-graduate center Craig Brackins (committed to Iowa State) and 6’7 junior power forward Emmanuel Negedu. But Bridgton fought back quickly to cut the Brewster lead to two. After only 8 minutes of action a potentially big call sent Bridgton’s only interior presence Justin Burrell (committed to St. John’s) to the bench with his second foul forcing Coach Lesure to go with essentially a five guard line-up.

But the undersized line-up actually ended up being a blessing in disguise for Bridgton as the quick and energetic unit swarmed the court on the defensive end in turn fueling their transition offense. Not only were they able to keep the game close with Burrell on the bench but they actually opened up a 12 point lead late in the half before Brewster closed the period with a 6-0 to head into halftime trailing 40-36.

Bridgton came out strong in the second half and was able to extend the lead to 18 at the 8 minute mark. But there was no quit in Brewster as they continued to claw their way back into it, eventually cutting the lead to 10 (68-58) with four and a half minutes remaining in the game. But on the next two possessions Burrell came up big scoring on the interior and then making a nice interior pass leading to a lay-up for teammate Rashard Green to extend the lead to 72-58. Down the stretch Bridgton took care of the ball and made free-throws to pull out a 80-67 victory and earn their third straight Class “A” championship. Following the game Rudolph was awarded the MVP trophy to the delight of his hometown fans.

Last season St. Andrew’s won the Class “B” title on a last second shot. This year was no different. At the conclusion of what was a very exciting game St. Andrew’s held a two point lead 61-59 with only ten seconds left to play in the game when Marianapolis called a time-out to diagram their final offensive possession. Coming out of the huddle they got the ball into the hands of 6’3 senior guard Barry Latham (committed to Bryant) who brought the ball up the floor while being guard by Rakim Sanders (committed to Boston College). Latham received a ball screen at the top of the key and was able to turn the corner, get into the paint, and score with a driving lay-in on his dominant left side to tie the score at 61.

St. Andrew’s quickly in-bounded the ball, with about 5 seconds remaining in regulation, to Sanders who pushed it hard up the right side of the floor. With time winding down he drove across the three-point line, stopped quickly in his tracks, and released a pull-up jumper from about 15 feet that banked off the backboard and rolled around the inside of the rim before falling through the net to give St. Andrew’s back to back Class “B” titles in what was easily the most exciting game of the day.

The game seemed to go back and forth throughout all 32 minutes as St. Andrew’s would establish a small lead only to find Marianapolis fight their way back to within a possession by staying in their offense and doing a nice job of executing. The game couldn’t have been tighter in the last five minutes as players on both sides made big plays and each team held the lead at different points. For St. Andrew’s, Andrew Hanson, Joe Accaoui, Brian Hanuschak, and the hero of last year’s championship game Mike Culpo all had big baskets down the stretch. For Marianapolois, Keenan Burke-Pitts, Beyiha Ba Nguindjel, Nikoal Vukadinovic, and Chris Galbraith came up big as well.

But ultimately the final 10 seconds was a fitting conclusion to the game as the battle between Latham and Sanders was once again a special match-up for all 32 minutes. Sanders didn’t shoot the ball well in the first half but was still able to assert himself by controlling the glass and scoring on some offensive put-backs. In the second half he heated up as he made back to back three-pointers when pulling up off the dribble. Latham on the other hand came out of the gate strong knocking down a three, getting to the rim, and showing his patented mid-range game. Ultimately, both of these players were extremely effective and tonight it might have just come down to who had the last shot…and for the second year in a row St. Andrew’s knocked down their last shot.

In a game that was somewhat closer then the final score indicates Lawrence Academy used some tough half court defense to pull away from St. Mark’s. 6’4 senior shooting guard EB Davis was the offensive catalyst throughout the night showing why he is one of the top unsigned seniors in New England. On the defensive end, 5’8 junior point guard Stevie Mejia (committed to Rhode Island) set the tone from the get go as he was clearly fired up for his head to head battle with St. Mark’s New Hampshire bound point guard Sal Abdo.

The game was close throughout the first quarter of action as Lawrence held a slim 15-13 lead. But for the next 6 minutes St. Mark’s was unable to score a point while Davis scored three consecutive baskets to give Lawrence a 23-13 lead with only two and a half minutes remaining in the half. St. Mark’s went on a 6-0 run to close the half behind the inside-out combination of Abdo and 6’7 freshmen forward Nate Lubick to close the gap to 23-19 heading into halftime.

Coming out in the second half Mejia picked up a steal on the first possession of the period that led to a lay-up for Darryl Cato-Bishop on the opposite end. Then when Lawrence Academy Head Coach Kevin Wiercinski opted to have Bishop handle some of the ball-handling responsibilities, Mejia was able to free himself for two big three-pointers to extend the LA lead and give Davis some much needed help on the offensive end.

Abdo, playing his last game in a St. Mark’s jersey, made a valiant effort to lead a St. Mark’s run, scoring on two driving left handed lay-ups with high degrees of difficulty as well as an offensive rebound tip-in.

For St. Mark’s this game will likely end up to be a valuable learning experience for a young and talented team that returns a host of division I prospects next year led by the frontcourt tandem of Lubick and 6’8 sophomore forward Erik Murphy.

Following the game E.B. Davis picked up the well deserved MVP honors as he no doubt caught the attention of the college coaches in attendance with offensive proficiency, strength and athleticism.