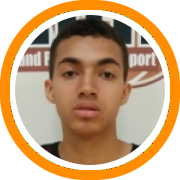 “I just want to thank my mom, she helped me make this decision,” Boachie-Yiadom told NERR. “I’d also like to thank Metro Boston. They allowed me to play for them, showcase my skills, and really develop. I love the fact that I went to Loomis as well. It’s a great prep school. I’d like to thank my coaches from back home, Patrick and Jimmy, who have developed me since I was younger and always had confidence in me. It was with their guidance that I became the player and person I am today.”

The 6-foot-8 forward is a native of Great Britain who is now in his third season at Loomis. He has starred with Metro Boston during the spring travel periods but returned home in the summer to play with England’s national team.

This past summer he helped England win the silver medal in the FIBA Europe u18 B division, which was especially significant because it earns them an opportunity to compete in the A division next summer.

As for his recruitment, Davidson first saw Boachie-Yiadom play with Metro Boston as an underclassmen and has continued to monitor him since, including the FIBA Europe Championships this summer in Estonia.

He took his first official visit to their campus this past weekend and that was enough to convince him to make a decision in time for November’s early signing period.

“I really loved the coaching staff,” he said. “I like that it is a stable situation. I like the fact that they’ve worked with a number of European players and that they were one of the first to work with European players. It’s a great academic fit and to get a degree from there would be great.”

Boachie-Yiadom made a significant jump last year as both his body and the versatility in his game began to go to new levels.

“I couldn’t be happier for Nelson and his family,” Loomis Chaffee head coach Rock Battistoni said. “His hard work, dedication, and desire, both on and off the court, has paid off. Davidson is getting one of the most versatile players in New England, but an even better young man.”