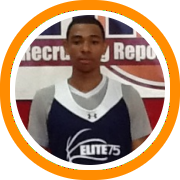 The Northeast Hoops Festival got underway on Saturday morning with a gym packed with division II and III coaches.  Here’s a look at who impressed:

Kahlil Dukes, CBC – His evolution in the backcourt has been well documented thus far this year and it showed again this morning as he ran the point nicely – seeing the floor, running the team & showing an efficient floor game.

Cornelius Tyson, BasketBull – His talent has always been undeniable and now we’re starting to see some maturation in his game.  He’s playing the part of a playmaker, creating for others and using his quickness well on the defensive end.

Shawn Strickland, Drive 4 Stardum – He owns a well developed skill set that leads to versatile individual offense.  He was at his best when he played within himself, showing the ability to create for himself and others along with a quick pull-up.

Sam Dourisant & Tom Bajda, United Sons & Daughters – The duo took turns sparking USAD in the 1st half.  Dourisant got it going by rattling off ten straight points then Bajda answered with nine of his own including two long balls and a three-point play the old fashioned way.

Schadrac Casimir, United Sons & Daughters – Quick, crafty guard led the way from the point to put points on the board with his dribble pull-up being his first and best weapon.  This was his second straight quality outing that we’ve seen.

Jamaree Hall, Bay State Magic – Physically gifted big man from Dennis-Yarmouth on Cape Cod stands six-feet-seven inches off the ground with good muscle tone and length along with the complimenting motor to give him undeniable upside.

Sean Dorcaster, Bay State Magic – A power swingman with a hard-nosed game, Doncaster attacks the rim in straight lines, is a threat with his jumper out to the arc, and brings all the toughness and intangibles a coach could ask for.

Victor Aytche, Metro Boston – Best known as a slashing scorer, Aytche showed off an improved outside stroke that had him knocking down multiple shots from behind the arc with good loft and backspin on his ball.

Bernard Brantley, CBC-Donnelly – “Shootie” has added some new weapons to his repertoire since last AAU season with a polish jumper, increased athleticism, and about ten pouds of extra muscle on his frame.  All helped to put up big numbers.

Paschal Chukwu & Kurt Steidl, CBC-Donnelly – They’re an intriguing interior tandem with Steidl providing length and playmaking on the wing and the recently added Chukwu patrolling the middle with his shot-blocking and screaming signs of upside.

Chris Jenkins, Team NJ Elite – The well-built guard opened the tournament in style, stroking shots from deep range for four first-half three-pointers.  His offensive explosion pushed NJ Elite’s lead to 20 for what went on to be an easy win.

Rob Ukawuba, Team NJ Elite – A man among boys around the rim, the East Brunswick (NJ) forward is as powerful as he is explosive and he proved it with three hammer dunks and a huge blocked shot to pin a potential lay-up off the backboard.

Travon Gibbs, CT Select-Will – 6’7” junior who started to make a name for himself this morning, Gibbs is long and athletic with a relentless motor to come up with steals, blocks, deflections, and all kinds of plays to earn extra possessions.

Cole Libby, Maine Hoopos – Libby got hot with his jumper early and led the team in scoring from start to finish.  He’s a well-built swingman with a gritty floor game that had plenty of on-looking college coaches intrigued.

Thiwat Thiwat & Labson Abwoch – It was easy to see how they teamed up to earn a state championship this year as they possess a unique combination of length and power that transcends to a versatile and dangerous post tandem.

Bryan Jones, Connecticut Select – For the second consecutive weekend, Jones came out on fire behind the arc.  With his jumper established early he began to go to work off the dribble, leading Select to a run-away win.

Jordan Butler, Connecticut Select – He’s a prospect on the rise after flying previously under the radar.  With a plethora of tools at his disposal including a massive frame, long arms, and soft hands he’ll have coaches lined up before it’s all said and done.

Matt Gerak, Connecticut Gold - The scoring swingman came out and showed his soft shooting touch from the perimeter along with his typical crafty scoring prowess to lead Gold in scoring in both of their morning match-ups.