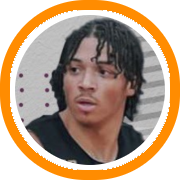 Duncan came to NDWH Prep for a post-grad year after a standout career at Sacred Heart Hogj School. He helped lead the Hearts to a 2021 NVL championship as he was named Tournament MVP. Duncan was also selected as a 2021 GameTimeCT Second Team All-State selection.

At NDWH Prep, he was a key piece of a squad that played in the very competitive Power 5 Conference - AAA League.

“Tre Duncan was a pleasure to coach this past season at Notre Dame,” said NDWH Prep head coach Nick DeFeo. He improved in all areas of the game especially on the defensive side of the ball. Offensively, he expanded his game and started to create more off the dribble.”

“Post will be a great fit for Tre especially in the long run. He will have the ability to learn and grow with Coach Kuntz’ guidance and hopefully make a few runs into the NCAA tournament. He will have a great opportunity to compete at the scholarship level.”

Duncan becomes the second member of NDWH Prep’s 2022 class to finalize their college plans, and first to commit to a scholarship level program.