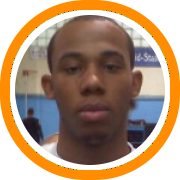 Game of the Night:

In a match-up of two well-balanced teams featuring a mixture of outstanding guard-play and physical presence on the interior, Notre Dame took on Westwind in what turned out to be a highly-entertaining, up-and-down contest.  Westwind lead-guard Kiwi Gardner controlled the pace in the game’s opening 20 minutes, pushing the tempo at every opportunity for transition buckets and pulling-up for jumpers in-front of defenders struggling to match his dynamic end-to-end speed.  With Gardner putting up 16 first-half points, to go along with 13 from Utah commit George Matthews, the three-point shooting of Sam Cassell Jr. and Myles Davis was all Notre Dame could do to keep Westwind’s lead to just six, at 42-36, heading into the break.

If the first half belonged to Gardner, then the second 20 minutes were owned by Notre Dame’s Todd Mayo.  The 6’3” wing put on an offensive clinic in the second half, scoring at will with a flurry explosive finishes in transition, smooth mid-range pull-ups, and assertive drives to the hoop.  Mayo’s explosion quickly erased Westwind’s halftime lead and locked the two team’s in a highly-completive, back-and-forth affair featuring dynamic backcourt play on both sides.  A Mayo step-back three from the left-wing put Notre Dame up one, at 76-75, with just under five minutes to play, followed by a Khem Birch jumper on the following possession that would push the lead to three.  Westwind would battle back to take the lead, 81-80, on a driving hoop by UC Satan-Barbara commit John Green, but a corner three from Cassell Jr. and a lay-in by Mayo would give Notre Dame the lead for good, at 85-81, with just over a minute remaining.

Mayo finished his tremendous performance with a team-high 26 points, including 19 after the break, on 12-16 shooting.  Cassell Jr. followed with 18 on seven of nine from the floor and four of five from behind the arc.  Davis added 15, and Birch, whose impact was minimized at times by the game’s frantic pace, finished with 11 points, six boards and four blocks.

Gardner led Westwind with 26 points and six assists, but the electric guard shot just 4-16 in a second half that saw his efficiency level drastically decrease.  Matthews finished with 19, while Green, who had a pair of spectacular dunks in the second half,  recorded a solid double-double with 19 points and 10 rebounds.

Ricardo Ledo (South Kent)- Some players are just effortlessly smooth playing the game of basketball, and Ledo certainly holds that distinction.  His length, athleticism and creativity off the dribble allow him to make plays other players simply can’t, and if he’s knocking down perimeter jumpers like he was early in South Kent’s 62-44 victory over La Lumiere, then he’s virtually impossible to defend.  While he followed up his 30-point performance on Friday with a modest 13 points on Saturday, it’s fair to say that Ledo has the chance to be as good as he wants to be.

Maurice Harkless (South Kent)- Harkless may lull you to sleep at times with his calm demeanor and cerebral style of play, but he demonstrated several times on Saturday the skill level and explosiveness that will be a welcome addition to Steve Lavin’s St. John’s program next year in the Big East.  He consistently got to the bucket in the half-court with smooth, change-of-pace dribble-moves, and, mid-way through the second half, electrified the crowd with a vicious one-hand dunk on the baseline over a late-rotating La Lumiere defender.  Aside from his obvious physical talent, most impressive during his 17-point performance on Saturday was the efficiency he displayed in taking high-quality shots and playing within the flow of the offense.

Todd Mayo (Notre Dame Prep)- Mayo was dynamite in the second half for his Notre Dame squad against Westwind Prep, putting his teammates on his back during a 19-point outburst that a showcased an explosive, diverse offensive skill-set.  Whether he was hitting from the perimeter, finishing above the rim in transition, or creating offense off the bounce, Mayo showed that, on a roster loaded with high-major talent, he isn’t afraid to take over and carry the load in a tight ball game.

Sam Cassell Jr. (Notre Dame Prep)- A steady compliment to Mayo on Saturday, the 6’4” Cassell Jr. has great size for a lead guard that allows him to shake off smaller defenders and remain comfortable handling the ball under pressure.  He showed a willingness to step up and take the big shot in the closing minutes against Westwind, connecting on a corner three that gave Notre Dame the lead for good with less than two minutes to play.

Kiwi Gardner (Westwind Prep)- Gardner’s 26-point, six-assist effort against Notre Dame may not have been enough to win the game, but it was enough to recognize his ability to dictate the pace of a game to best suit his style of play.  Opposing defenders had absolutely no chance of staying in front of Gardner with his quickness and creativity with the ball, and, although his lack of size and inconsistency from the perimeter limits his efficiency at times, his superior athleticism should give him the opportunity to be a dynamic playmaker at the next level.

Alex Murphy (St. Mark’s)-  ESPN’s sixth-ranked player in the country in the class of 2012, Murphy was aggressive attacking the rim on Saturday on his way to an 18-point, 17-rebound performance.  Always under control and playing with a level of confidence that resonates with his younger teammates, the highly-skilled Murphy was a steady force in a game in which St. Mark’s was never really challenged.

Kaleb Tarczewski (St. Mark’s)- The 7’0” Tarczewski (25 points, 10 rebounds) showed the rim-to-rim running ability and improving offensive skill-set that continues to make him one of the most intriguing prospects in the class of 2012.  With added strength and maturity, he has all the physical tools to be a dominant, game-changing center at the highest levels of college basketball.

Kevin Zabo (St. Mark’s)- Just a freshman, Zabo impressed in St. Mark’s game against Lee Academy on Saturday with a creative handle and ability get into the lane with a chance of pace, draw help, and make positive plays.  Good looking prospect in the class of 2014.

Dennis Green (Winchendon)- At 6’3”, 185 lbs, Green is a physical lead guard in the class of 2013 who uses his size and strength to attack the rim off ball-reversal and harass opposing ball-handlers with active, head-to-chest ball pressure.  He demonstrates a mature understanding of facilitating his team’s offense for a young player and shows solid awareness on the defensive-end talking his way through ball-screens and weak-side rotation.  If he continues to expand his offensive skill-set to incorporate a consistent perimeter jumper, he should be a tough cover for smaller, less-physical guards down the road.