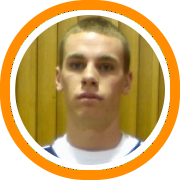 The Albert Schweitzer Tournament is essentially the unofficial 18 and under world championship.  16 different countries are represented in the field including all of the European powerhouses.  The tournament is organized by both the German Federation and the United States Army, with most of the action taking place inside the U.S.’s Mannheim military base.

New England’s Erik Murphy was one of the 12 players selected to represent the United States, joining the likes of Travis Releford (committed to Kansas), Cashmere Wright (committed to Cincinnati), and his future teammate at the University of Florida Erving Walker.

Despite the fact that the American team didn’t even practice until they arrived in Germany three days before their first game, they were still able to earn a record of 7-3 and finish in fourth place.  Their three losses came to the three medal winners as Greece took the gold, Turkey the silver, and Australia the bronze.

“Most of the other teams had been playing together for three or four years,” said Murphy.  “I think if we had a few weeks of practice before we went over there we would have won the whole thing.”

Longtime NBA player and coach Lionel Hollins served as the team’s head coach.  The former point guard utilized a perimeter oriented line-up that sometimes made it difficult for Murphy and the other big men to get into the flow of the offense.  Nonetheless, the St. Mark’s forward was still able to put together some impressive performances including a double-double in one game.

Murphy also got his first glimpse of international competition, including the very different styles of play that many of the European teams utilize.

“European basketball is a whole different style,” he said.  “It was much more physical than I expected.”

International basketball is nothing new to the Murphy family, as Erik’s father Jay played three years of professional basketball in France and four in Italy (he also played in the NBA).  In fact, Erik was even born in France.  So, is there a chance that he could follow in his father’s footsteps?

“Obviously I want to try and take it as far as I can here in the U.S., but I would definitely like to play in Europe,” he said.