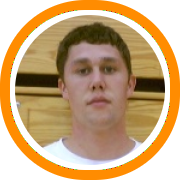 Four St. Thomas More Players Commit
Ethan Robinson, Drew Zito, Tori Stapleton, and Dylan Drake all earned scholarships to various division II schools from around the country.  Robinson will be headed to the University of California-Pennsylvania, Zito to Southern Connecticut, Stapleton to Southern New Hampshire, and Drake to Nova Southeastern.

The duo of Robinson and Zito had teamed up long before arriving in Oakdale when they starred on the 2006 CT Gold team that also featured Notre Dame bound forward Tim Abromaitis.  Robinson is a skilled big man whose greatest value lies in his ability to stretch the opposing defense with his shooting range.  Zito is a guard who is as tough as they come and should make his presence immediately felt with the Owls.

At the beginning of the year Stapleton had the reputation of being a division I talent who was terribly out of shape.  But after seemingly rededicating himself to the game this season Stapleton is finally living up to his potential, which makes his commitment to the Southern New Hampshire a great get for the Penmen.  The instinctive scorer should have no problem contributing right away next year.

Drake is an old school point guard who thinks pass first shoot second, but is always capable of making shots from deep range.  He earned more and more playing time at STM this year as he proved his worth against players that were often bigger and more athletic.

Winchendon’s Andy Pelletier Headed to Franklin Pierce
It is a pretty strong statement for any team when their 12th man earns a scholarship.  Well that proved to be the case with this year’s Winchendon team as hardly used forward Andy Pelletier is on his way to Franklin Pierce.  Pelletier is a versatile forward with good size who can play on either the post or perimeter.  His lack of playing time this season was no indication of his ability, as he should be able to make a solid impact at Franklin Pierce, only the amount of depth that this year’s Winchendon team possessed.  Pelletier had previously planned to attend Emory College before he decided to reevaluate his options.

Cory Orgias on the way to New Haven
Notre Dame Prep’s 6’3 forward Cory Orgias has committed to the University of New Haven.  This season at Notre Dame Orgias was a rotation player who helped his squad to the first ever Prep School National Championship.  He is an extremely powerful player who should make an immediate impact on the defensive end of the floor as well as on the glass next season.  He will have big shoes to fill however as the last Notre Dame Prep player to end up at New Haven, Cassius Chaney, recently earned East Coast Conference Rookie of the Year honors as well as being named second team all-conference.

Brewster Academy Duo Headed West
Matt Hornbuckle a 6’3 guard from California will be returning home to play division I basketball at Santa Clara.  Hornbuckle is best described as a slasher who finds ways to put the ball in the basket.  This season he provided a spark off the bench for a Brewster Academy team that advanced to the finals of the NEPSAC tournament.  At SCU he will play for first year head coach Kerry Keating who became the West Coast Conference’s youngest head coach after being lured away from his position on the UCLA bench.

Hornbuckle’s teammate, 6’9 F/C Grant Hope will also be headed back to the west coast as he plans to attend Seattle Pacific University next season.  Hope offers the rare combination of having a big strong body in addition to a solid shooting touch from the perimeter.  Prior to arriving at Brewster for his post-graduate year the Washington native was invited to the 2006 West Coast All-Star Camp.

Mike Brion to Attend RPI
Mike Brion from Bishop Guertin High School in New Hampshire has committed to RPI where he will play both Football and Basketball.  The 6’4 forward is said to be one of the best all around athletes to come through Bishop Guertin as he was an all-state performer in both sports during his senior year.  Brion attracted quite a bit of attention from college coaches last summer when starring for the New Hampshire Playerz AAU team.  During that time he quickly developed the reputation for being an extremely tough player who was at his best when attacking the rim.