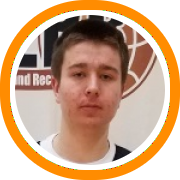 The Middlesex Magic have announced two more commitment from their program's 2017 class.

The first is Kingswood-Oxford for Jackson Meshanic who will be headed to Hobart College. Hobart head coach Tim Sweeney is a longtime D1 assistant who has making his presence felt in New England ever since taking over the program. In fact, Sweeney and his staff were both at the Elite 75 Academic Experience New York earlier this fall to watch Meshanic.

The 6-foot-6 Meshanic is a crafty interior player with a tremendous back-to-the-basket game. He has excellent footwork and a wide assortment of moves on the block. He's equally good in pick-and-roll and has continued to extend his shooting range as well. Most importantly, he is an outstanding rebounder.

"Jackson is one of the hardest working players and most team-oriented  young men I have ever coached," said Magic directory Michael Crotty Jr. "Coach Sweeney got a great young man and a player that I think can make an immediate and last impact at Hobart."

Meshanic was named third team All-Class B in the NEPSAC last year and was also selected to the All-Tournament Team at the Memorial Day Super 16 Showcase.

Franklin High School product Paul Mahon is also off the board followingn his commitment to Keene State.

"Paul is one of the most competitive and hard-nosed guards in the program," Crotty said. "Paul is a slashing guard who gets to the rim and into the lane for floaters and pull-ups. Paul is a very solid shooter with great form, and I believe his development shooting the three will be a big factor in his play at the college level. Defensively Paul is a stopper. Very strong and laterally quick, he defends the toughest guards and plays with an edge. A guard who can do a little bit of everything, his toughness is his trademark quality and the one that will allow him to impact Coach Cain and the Owls most."

Mahon is also the captain of the Franklin High School team.