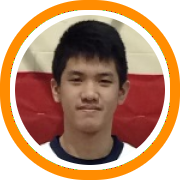 It is not uncommon for St. Andrew's School to dominate Rhode Island rankings and with the RIIL ranks being a little less deep than it was a year ago, the Saints currently hold the top three ranked prospects in the state as well as five of the top ten.

However, this year there's another NEPSAC school, Rocky Hill, that is ripe with 2019 talent as they feature three other top ten ranked prospects.

Here's a rundown of all you need to know in the Ocean State's senior class.

Saints' guard Brycen Goodine remains unchallenged as the top ranked prospect in the state. He made an early commitment to Syracuse in the fall of his junior season and ironically has continued to fly a little under the national radar despite putting up good numbers in the EYBL. An athletic and wiry guard with good size, Goodine has continued to add new weapons to his repetoire throughout the course of his career. He's worked his way into a consistent shooter and increasingly dangerous playmaker. He also has the tools to be a weapon inside Syracuse's trademark 2-3 zone.

Keegan Records may be a SAS post-grad but he's also a true local product after graduating from nearby South Kingston High School a year ago. The extra year appears to be doing the big man lots of good as he has already made notable strides in the last few months and still has plenty of upside left to discover. Records has a naturally powerful frame and yet fairly mobile feet. He plays with good energy, provides an intimidating physical presence inside the paint, and is a constant double-double threat.

Rocky Hill wing Tedrick Wilcox is another player with still untapped upside who continues to evolve and add new scholarship offers in the process. The budding jumbo wing has good size and length on the wing as well and a vast natural tool set. He can play above the rim, knock down threes, and show flashes of playmaking ability in the open floor.

St. Andrew's post-graduate guard Benson Lin is still relatively under the radar in New England despite signing with Manhattan during November's early signing period. Ironically, he's a bit of an international sensation though as the Taiwanese native was once dubbed the next Jeremy Lin and profiled by national media outlets including ESPN. Lin is a skilled shot-making guard with good size who should be a nice piece for the Jaspers next year.