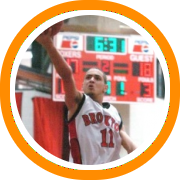 At least for this week, Brockton is the number one team in the state following an impressive line of victories over Catholic Memorial, Newton North, and Mansfield. The Boxers’ 13-1 record is in thanks largely to Jaylen Blakely, big man Sayvonn Houston, and Jamal Reuben - who scored 28 points in the win over Catholic Memorial. Houston has asserted himself as one of the toughest bigs in eastern Mass. to stop, while Blakely has shown that night in and night out he can be the best shooter on the floor against any given opponent. Sophomore Aamahne Santos continues to impress for Catholic Memorial, he poured in 21 points against Brockton, as senior 1000-point scoring duo Matt Droney and Dan Powers scored 24 and 13 points, respectively. 16-1 Newton North recovered quickly from the Brockton loss, and came back to defeat a very talented Weymouth squad on Tuesday night, future Emerson guard Mike Thorpe scored 20 and their tough forward Barry Santana scored 21 points and pulled down 17 rebounds.

Senior Tyrell Springer (17 ppg) and junior Kamari Robinson have been making noise out in western Mass. all season, and they can no longer be ignored as Springfield Central sits on a 15-1 record after a second half dismantling of fellow western Mass. power Springfield Cathedral. In central Mass, St. Peter-Marian made headlines this past Friday night by defeating central Mass. D2 favorite Quabbin 89-82 in a four overtime thriller that may very well go down as the game of the year in MIAA hoops, Guardians senior Matt Mobley is just 13 points away from 1000 and he will look to reach that mark Monday night vs Worcester North.

Acton-Boxborough has seen fantastic senior seasons from Kevin Lafrancis and Joey Flannery, as A-B moved on this week to a 16-1 record by avenging their only loss this season to Westford Academy by knocking off WA at home. Their home matchup on Monday night against Brighton guarantees to be one of the top games of the year in MIAA hoops.

With wins over Lawrence and Haverhill this week, Central Catholic is now 16-1 and per usual, has to be mentioned with the elite teams in Division 1. Tyler Nelson has already proven as a sophomore that he is one of the top shooters in the state, while Luis Puello has set the bar high for fellow defensive-stopping guards in MIAA hoops. Another usual power, Charlestown got a big home win over a very talented Whitinsville Christian this week. Rony Fernandez led the way for the Townies with 26 points, but Charlestown also got double-figure performances out of big man Tyrik Jackson, forward Omar Orriols, star guard Tyrese Hoxter, and Iser Barnes, in an 87-69 win.

In Division 2, Brighton has stood out all season behind sophomores Malik James and Nick Simpson, and they continue to do so after destroying New Mission this week to move on to 16-1. James had 20 points and 12 assists in the 73-53 win, and Simpson finished with 16 points. As mentioned above, their showdown with Acton-Boxborough promises to be a good one.

Hockomock foes King Philip(13-3) and Stoughton(14-2) still stand tall as Division 2 favorites this week, KP’s star forward Jake Layman is dominating any competition in his way and is showing what a tough out KP will be come tournament time. Stoughton suffered a loss this week to Oliver Ames and barely got past Sharon, but keep in mind they beat King Philip on the road three weeks ago; Aaron Calixte is one of the top players in the state and he certainly isn’t going anywhere with the MIAA tournament soon approaching.

In Division 3, Whitinsville Christian played a close game with Charlestown until point guard Colin Richey got into foul trouble late in the second half, but the Crusaders showed why they can play with the state’s best behind Richey’s 23 points. WCS faces rival Sutton this week before a showdown with Holy Name, one of central Mass’s best teams, on Friday night. With Quabbin finally losing this week, the Wareham Vikings now remain as the only undefeated team left in the state. Junior point guard Darien Fernandez has asserted himself as one of the top point guards in the state this year, and with his team now at 18-0 with two regular season games to go, it looks likely that the Vikings could finish this regular season with the only perfect record in MIAA.

Cardinal Spellman is now 15-4 after beating St. Mary’s on Friday night. Bentley-commit Joe Glynn has been one of the top players in the state this year and Spellman could be a potential foe for Wareham in D3 south. D3 north favorite Danvers moved to 14-2 this week, mostly recently beating Saugus with relative ease; Eric Martin, Joe Amico, Nick Mckenna, and George Merry were all in double figures.