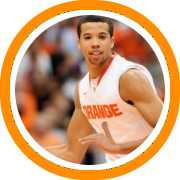 We make a couple of exceptions each year, like previewing the beginning of the NCAA tournament or the NBA Draft, but never to report on a particular performance or game.

But today is an exception.

Syracuse sophomore guard Michael Carter-Williams scored 24 points, grabbed 5 rebounds, and picked 4 steals, in what some are calling the best performance of his college career, to lead the Orange over top seeded Indiana 61-50 in Thursday night’s Sweet 16.

His performance wasn’t just about leading Syracuse to the Elite 8, it was about picking up his family, after their house (the one he had lived in since he was just four years old) burned down last weekend while Syracuse was playing in the third round of the NCAA tournament.

The story of Carter-Williams dramatic performance has been covered, rightfully so, by multiple media outlets.  Here are some of Friday morning’s headlines:

ZagsBlog.com - Adam Zagoria: In Wake of Devastating Fire, Carter-Williams Plays on with Inspiration