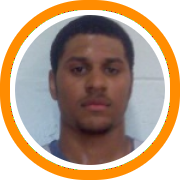 In a match-up featuring two teams most people didn’t expect to be in Sunday’s final, fourth-seeded MCI, who advanced from Friday’s semifinal with a convincing upset of top-seed and defending New England Champion Brewster, took on third-seeded New Hampton in a contest dictated by the disciplined, well-executing play of MCI.  With UNC-Greensboro-commit Nick Paulos (nine points, three threes) and UMass-bound Jordan Laguerre hitting shots from three early, New Hampton would jump out to an early lead that would quickly evaporate due to the aggressive play of future Indiana State Sycamore Khristian Smith and six-foot-four forward Adrian Rogers.  Laguerre would hit a three to give New Hampton a three-point lead, at 26-23, with six minutes remaining in the half, but MCI would respond with buckets from Smith and Omari Grier and eventually take a five-point lead, at 35-30, on a deep three from point guard Daishon Knight (nine points) at the halftime buzzer.  MCI would open the second half on fire behind the continued efficiency of Smith and timely perimeter shooting from Rogers, and, with New Hampton struggling to establish any real continuity on offense, the Huskies would build at 16-point lead, at 59-43, with just over six minutes remaining in the half.  Smith would continue to dominate offensively down the stretch and MCI, which dictated tempo and controlled the defensive backboards all evening, would eventually cruise to a 73-56 victory and capture the 2011 New England Class AAA title.

Smith finished with a game-high 28 to lead MCI, to go along with 15 from Rogers.  Laguerre led New Hampton with 15 points as the only Husky player to reach double-figures.

Dave Campbell, MCI Head Coach:  “I couldn’t be prouder of our effort over the last three games. We played tremendously hard defensively, and, while we may have had a couple breakdowns offensively on a few occasions, we continued to play hard and, for the most part, we executed well and were able to dictate play in our favor.”

Khristian Smith (MCI): “Nobody really expected us to be here, except for us, and I think we showed people that we belonged.  We just took it one game at a time, played together on offense, and really made a consistent effort to guard and rebound the ball.  We believed in each other from the start and now we’re New England Champions and it feels great.”

Picking right up from where he left off on Friday, in what was an efficient, 15-point performance against heavily-favored Brewster, the six-foot-six, future Indiana State Sycamore exploded for a game-high 28 points on a variety of athletic finishes at the rim and catch-and-shoot jumpers from the perimeter.  Smith demonstrated a determined will to lead his team to victory in Sunday’s final, rebounding the ball with noticeable conviction on the defensive-end and asserting himself as a constant source of energy and vocal leadership throughout MCI’s improbably, three-game run to the Class AAA title.

While MCI did a nice job containing him off the bounce in Sunday’s Class AAA championship game, the future UMass Minuteman showed flashes of his ability to break his defender down off the dribble and score at the rim from a variety of angles.  Finishing with 15 points, Laguerre was efficient knocking down shots from behind the arc and, while he was unable to find a consistent rhythm and score the ball in high volume, he continued to compete hard on both ends until the final buzzer.