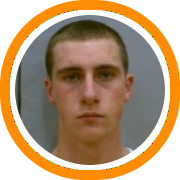 Marianapolis Prep ran away with the Class D title last year by defeating Brimmer & May, Hamden Hall, and St. Luke’s School by 28, 39, and 22 points respectively. This year there are new challenges on the horizon after jumping into Class B with the likes of St. Andrew’s, Proctor Academy, Tilton, and more. As if that weren’t enough, Marianapolis will also face the likes of South Kent, St. Thomas More, Notre Dame Prep, and Winchendon this year.

Coach Dave Vitale’s squad is led by two seniors in 6’3 shooting guard Barry Latham (pictured above) and 6’6 power forward Bayiha “Cooper” Ba Nguindjel. Latham is a long and athletic lefty who is a terrific defender and has an outstanding mid-range game on the offensive end. Despite scholarship offers from a variety of top division II programs, Latham has not yet made a decision and plans to play through the season before evaluating all of his options. Ba Nguindjel is a versatile forward who is most dangerous when playing with his back to the basket on the low post. By the end of the season he should have no problem acquiring a variety of scholarship offers.

Running the point for Coach Vitale’s team is 6’2 senior Drew Beck. Beck is an extremely athletic player with a good handle and a quick first step. He does a good job of running the team while also finding the right time to create his own offense. Beck is also hoping to play himself into scholarship contention by the end of the season.

The last two starting spots may be up for grabs. Contenders in the backcourt should include the sharp-shooting duo of 6’0 senior guard Nikoal Vukadinovic from Serbia & Montenegro and 5’11 post-graduate Keenan Burke-Pitts. 6’5 sophomore Toso Adebamowo is also an option if Coach Vitale chooses to go with a big and athletic line-up. Adebamowo is transitioning from the power forward position to the wing where he already demonstrates enough potential to be a possible division I recruit in a few years. 6’1 senior Mark Rhines and 6’0 junior Estefano Gonzalez should also be able to contribute during the course of the season.

There are several contenders for the starting center position as well. 6’6 post-graduate Chris Galbbraith may be the frontrunner with his strong play under the basket but there is plenty of depth with 6’6 senior Joe Boyle and 6’7 5th year senior Mike Lehane both capable of handling significant minutes. Mike’s younger brother Ryan Lehane, a 6’5 sophomore will provide frontcourt depth.

The Marianapolis roster is undoubtedly characterized by good talent and depth. But what may be most impressive about this group is the fact that they play very hard, share the basketball, and seem to be looking forward to proving that they belong among the best programs in New England.